Who does Luis Sáez credit for his rise to the top at Saratoga? 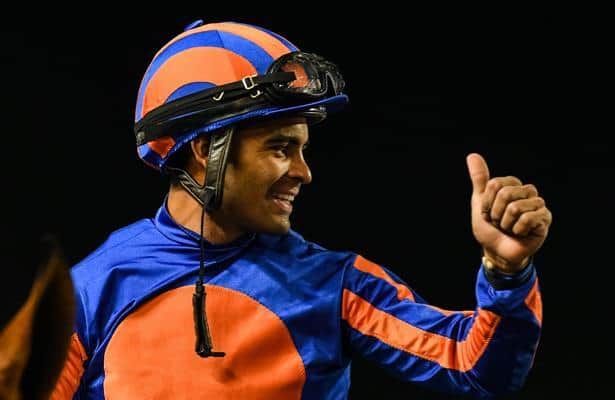 Luis Sáez must be having a good year. A really good year. So good he felt like he could hit pause on the quest for his first riding title at Saratoga to fly to the Midwest and get on eight horses Saturday afternoon at Arlington Park.

“I’m pretty happy and blessed to be here,” he said in the sun-splashed paddock between races on a day when he would collect his fifth Grade 1 triumph of 2021, doing so aboard Point Me By in the $300,000 Bruce D. Stakes. “It’s an honor for me to be here. I’m so grateful to be riding here today.”

The way 2021 has gone, Sáez has a lot for which to be grateful. He has put his name in serious contention to win the Eclipse Award as the year’s top rider. But he is taking nothing for granted, especially being on the crest of a wave that has taken him to the top of the jockey standings at Saratoga. He has 39 victories and a five-win cushion between him and the Ortiz brothers, who have won the last six titles there.

“I never expected that we were going to do that great,” he told Horse Racing Nation.

His use of the first-person plural was no accident. Sáez often refers to his family, both immediate and extended. That includes former trainer Kiaran McLaughlin, his agent whom he credits for getting him so many quality rides.

“Oh, yeah, he’s doing an amazing job,” Sáez said. “He’s a wonderful person. He and his family came to us like a big family, and we really love them. They are like the best thing we could have.”

“He’s well sought after, because he’s a top rider,” McLaughlin said by telephone from Saratoga. “He’s in demand right now, which has been nice, and he has been for quite some time. He’s a joy to work with, and we both feel blessed to be working together.”

After he retired from training in March 2020, McLaughlin replaced Richie DePass, who himself had retired from keeping Sáez’s book.

“When you make a decision to get a new agent, I don’t expect to do that great, because you never know,” Sáez said. “Every agent that I used to have was pretty nice to me, like family. Richie DePass was one of the best persons I ever hired in this business, and Mr. Kiaran is an amazing guy.”

“I was concerned about being able to follow in Richard DePass’s footsteps,” McLaughlin said. “But the connections have helped – obviously Godolphin, Shadwell and others – and he’s been riding so well.”

McLaughlin has found a lot of his old training rivals to be willing clients, and their satisfaction is seen in a widening footprint of success. Sáez’s 21 graded-stakes victories in 2021 have been for 14 trainers. His 39 wins at Saratoga have come after getting a leg up from 21 men and women.

“That’s pretty amazing,” Sáez said when he heard those statistics. “I have been working pretty hard, and we've been riding with a lot of confidence, and we have doing great, thank God. We are so blessed about that, you know?”

If he maintains that trajectory at Saratoga, Sáez could break the meet record of 68 wins set nine years ago by Ramón Domínguez.

“That’s a tough, tough track and a tough meet,” Sáez said. “The horses have been really, really running hard for us. Trainers and everybody have given us the opportunity. So everything has been all right for us.”

This summer’s success has come hand in hand with the rise of Mike Maker, who is first in the trainer standings at Saratoga, with 21 wins. He is four ahead of Chad Brown and seven better than Todd Pletcher, the two trainers who have had a lock on the last 11 titles at Saratoga. Highlighted by Cross Border’s victory July 31 in the Bowling Green (G2), five of Maker’s trips to the winner’s circle have come courtesy of Sáez.

“Mike Maker has always given me the opportunity,” Sáez said. “He always gives me the horses. I’m pretty happy that he’s doing great.”

He has spread the wealth of his achievements this year, and he does not blink at the sight of another opportunity. It was a risk to hit pause on his momentum at Saratoga, fly to Chicago and take eight rides Saturday. But the win on Point Me By made the trip worthwhile for Sáez. And for McLaughlin.

“It was great to win a Grade 1 for (trainer) Eddie Kenneally,” McLaughlin said. “He’s an old friend, and it was a nice win. We went there mainly for Mean Mary and Graham Motion, and she ran great (in the Grade 1 Beverly D.). She just was second best on the day, giving six pounds to a very good 3-year-old filly (Santa Barbara).”

It was not just a case of dashing to the airport in Albany, N.Y., and plopping himself on a flight. Sáez was burning both ends of the weekend candle.

“Saturday morning he got up at 4:40 and went and worked Essential Quality at Saratoga,” McLaughlin said. “Then he worked two more. Then he jumped on the plane, went to Arlington and got back at 11 o'clock at night. I had him work four more on Sunday morning. Then he rode (nine races) that afternoon. I feel bad sometimes, but he always says, ‘It’s Saratoga, and we have to work hard.’ ”

The results speak for themselves. After being asked Saturday to single out one of his Saratoga wins this summer, he hesitated only to underscore the question.

“A favorite win?” he said. “Essential Quality in the Jim Dandy (G2). That was amazing.”

Mystic Guide at the Dubai World Cup (G1) might have provided Sáez with a breakthrough triumph early this year, but there is no doubt Essential Quality would be on a 2021 poster of Sáez. All four of his wins for trainer Brad Cox have been on the consensus leader among 3-year-olds. That includes a memorably unflinching duel with Hot Rod Charlie in the Belmont Stakes.

That Belmont score helped to bury the memory of the 2019 Kentucky Derby a little deeper in Sáez’s past. That day, when he and Maximum Security were disqualified for interference, has been steadily overshadowed by his consistent success since.

“We don’t think about that,” he said. “That’s gone. That’s in the past. We just look forward, and we’re pretty happy and comfortable with what we are doing, and we enjoy the moment.”

McLaughlin said in their 1 1/2 years working together, Sáez has worked hard to tweak his aggressive style without completely suppressing it.

“He has been involved in only a handful of inquiries,” McLaughlin said. “He’s trying to do better with his riding, because he was always known for being aggressive and getting suspensions, but it wasn’t always his fault. He’s been great with me, and he tries to do everything properly.”

Making a comparison to Hall of Fame jockey Jerry Bailey, McLaughlin said Sáez has kept finding ways this summer to put horses in a position to win.

“Watching him ride the turf course in Saratoga, it's amazing how he can get over from the 10, 11, 12 post position into the two path,” McLaughlin said. “I look up into the first turn and say, ‘Wow, how do we do that?’ Not that he wins every time, but he does a great job putting them in a position that they can win, if they’re good enough. I’m proud of him.”

The professional relationship between Sáez and McLaughlin has extended to their personal lives. In spite of their age difference – Sáez is 29, McLaughlin 60 – their families quickly bonded.

“My wife and his wife have become close,” McLaughlin said. “He has three daughters, so my wife is able to enjoy time with them and spend time with them. It’s just been great. They go do things together, they’re very good people, and so it’s been a great relationship.”

If he keeps stringing together big moments through the rest of 2021, Sáez could break Irad Ortiz Jr.’s three-year grip on the Eclipse Award. He is third in wins this year behind Ortiz and Paco López, he is third in earnings to Joel Rosario and Ortiz, and his four U.S. Grade 1 scores are tied for second behind Ortiz’s six. Sáez certainly has put himself in the championship conversation.

“You know, that’s my dream,” Sáez said. “The Eclipse Award one year is going to be like the biggest thing for us. I don’t know. We just keep doing what we’re doing, and let’s see. Maybe one day we get there.”

Essential Quality might be the horse to get him there, especially if winning results come from this month’s Travers (G1) and this fall in the Breeders’ Cup Classic at Del Mar. So there is still work to do for Sáez, who is glad that he has put together his best year with each passing day.

“Just riding horses. That’s our life,” he said. “That’s what we really love, you know?”