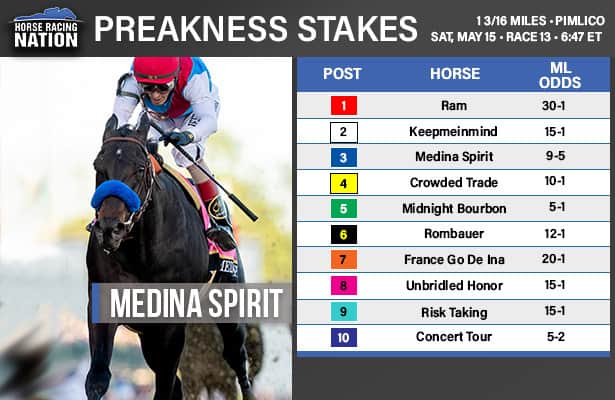 It was far from a routine draw that put controversial Kentucky Derby winner Medina Spirit into post 3 against stablemate Concert Tour and eight other rivals in Saturday’s Preakness Stakes at Pimlico.

Instead of the usual bon mots from trainers and owners, the aftermath was dominated by a veterinarian and a lawyer, both of whom had a say in allowing trainer Bob Baffert’s horses to race this weekend after Medina Spirit’s Kentucky Derby victory was punctuated by his positive drug test.

More than hearing that Medina Spirit was made the 9-5 morning-line favorite and Concert Tour, drawing outside in post 10, was the 5-2 second choice, most of the comments after Tuesday’s draw were about the negotiations that led Preakness officials to letting Baffert’s horses race Saturday unless they were to test positive this week.

“We pretty much went all day yesterday and a couple hours this morning,” Rifkin said. “But that was to make sure the language was right. Fortunately we saw a high level of interest in a resolution, recognition of the issues that were at hand and a practical understanding that transparency was good.”

Unlike the Derby case, which still depends on a second sample of Medina Spirit’s bloodwork to say whether he will be disqualified, there will not be a split sample of the pre-race test that he underwent on arrival at the track Monday.

“There will not be an opportunity for a split sample,” said Dr. Dionne Benson, the chief veterinarian for The Stronach Group that owns Pimlico Race Course. “The samples that we have will stand.”

Benson said test results for Baffert’s Preakness horses and his filly Beautiful Gift, who is entered in the Black-Eyed Susan (G2), were expected back Friday. Any of those horses that fails a pre-race test will be scratched by Baffert, according to terms of Tuesday’s agreement.

Oh, yes. The draw. In the absence of Medina Spirit’s assistant trainer Jimmy Barnes, who has been at Pimlico, and Baffert, who has not, Zedan Racing bloodstock consultant Gary Young told the MJC, “Post 3 won’t win the race for him, and it won’t lose the race for him. We anticipate that he and Concert Tour will be one-two early in the race.”

Well, not so fast. The Japan-based colt France Go de Ina (20-1) might also be among the early pacesetters. When he drew post 7, there was a soft cheer that came up from the table where his connections were sitting.

“It was a good draw,” Hideyuki Mori said through a translator. “We’d like to go toward the front. We want to make sure he gets a clean break, which he didn’t get (finishing sixth) in the UAE Derby. Just keep him away from other horses so he doesn’t get as much kickback in his face and keep him up toward the lead.”

Would France Go de Ina dare to challenge the Baffert pair and even sixth-place Kentucky Derby finisher Midnight Bourbon (5-1 in post 5) for the early lead?

“That’d be fine,” Mori said. “It might be preferable.”

Here is how the 10 horses drew into the Preakness (with jockeys, trainers) and their morning-line odds from Maryland Jockey Club handicapper Keith Feustle:

The National Weather Service forecasts a sunny, 73-degree day for the Preakness, which is the 13th of 14 races on Saturday’s card at Pimlico. Post time is 6:47 p.m. EDT. It will be shown live on NBC.