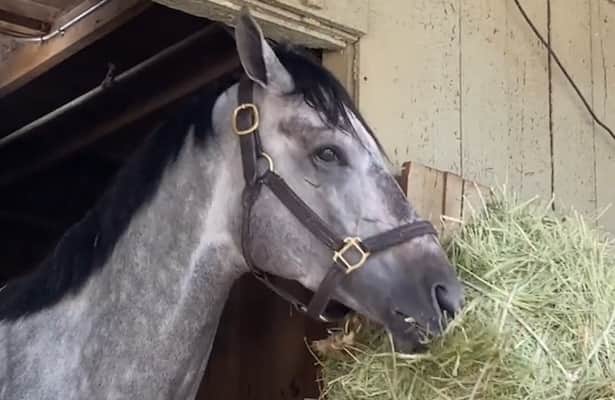 He won by only a half-length. But that does not tell even half the story of Essential Quality’s resilience in winning Saturday’s Grade 2 Jim Dandy Stakes at Saratoga.

Starting from the outside post in a field of five, Essential Quality had to cover 38 more feet of ground than second-place Keepmeinmind, according to Trakus Racing. That is about 4 3/4 lengths.

The Equibase chart said Essential Quality went “five to six wide” to reel in Dr Jack and then Weyburn and then Masqueparade. That he then “dug in under challenge to the inside” to outduel a ground-saving Keepmeinmind to win the race “gamely.”

“When he came to the top of the stretch, I had a lot of horse,” jockey Luís Sáez said right after the race on the “Saratoga Live” telecast. “When he takes the lead, he’s just waiting for competition. As soon as the other horse got close to him, he took off again.”

The CHAMP is here! ESSENTIAL QUALITY with a magnificent ride in the Jim Dandy (G2) with @luissaezpty aboard for @bradcoxracing pic.twitter.com/0gdkVVQ2ry

It brought to mind the trouble Essential Quality faced in his only loss, a fourth-place finish by 4 1/2 lengths in the Kentucky Derby. Trakus figures showed he had to travel 68 more feet than first-place finisher Medina Spirit, the equivalent of 8 1/2 lengths.

As Essential Quality’s trainer Brad Cox said the day after the Derby, “When you give up 68 feet, you do that math. Not to take anything away from the top three horses, but he was the best horse.”

All that ground loss caught up to Essential Quality late, but he was just better than these horses. Should set him up well for the Travers.

Essential Quality earned a Beyer Speed Figure of 98 on Saturday, according to the Daily Racing Form. That was the third best of his career; he got a 109 for winning the Belmont Stakes and 100 for his Derby defeat. By comparison, Keepmeinmind got a 97 for his runner-up finish Saturday, tying his career high for finishing third June 26 in the Ohio Derby (G3).

That led to a healthy debate on social media weighing Essential Quality’s Beyer regression against his wide trip.

“He had a ton of excuses. He just kept powering through,” former National Horseplayers Championship Tour winner Jonathon Kinchen said Sunday on the New York Racing Association telecast. “If you were looking for that flashy performance, that was the four lengths you needed (from going wide).

TimeformUS appeared to take the trip into account, giving Essential Quality a 121 figure.

“All that ground loss caught up to Essential Quality late,” David Aragona of TimeformUS wrote on Twitter. “Should set him up well for the Travers.”

As expected, Cox said Essential Quality’s next start is likely to be the Travers (G1) on Aug. 28 at Saratoga. At 1 1/4 miles, that will be a furlong more than Saturday.

“The further the better with him,” Cox said Sunday morning.

“This horse will run all day long,” Kinchen said. “I think we’ll see it again in the Travers.”