See the shippers who take home 100+ Beyers from Saratoga 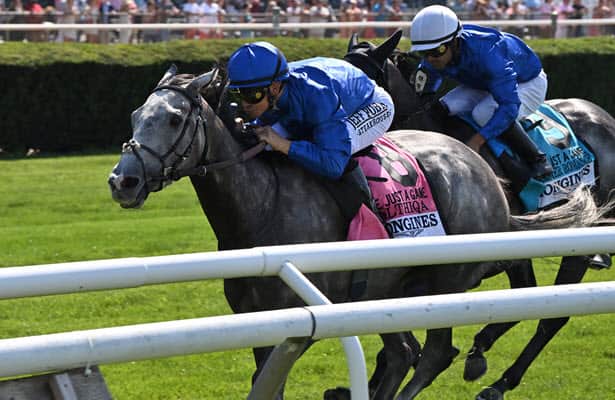 Godolphin’s talented gray fillies Althiqa and Summer Romance replicated their one-two finish in June’s Just a Game (G1) at Belmont Park by again completing the exacta in Saturday’s Grade 1, $500,000 Diana Stakes at Saratoga. They each got triple-digit Beyer Speed Figures for their efforts.

In the one-mile Just a Game, Summer Romance set the pace under Luis Saez. But the late-running Althiqa, with Hall of Famer Mike Smith up, arrived in the nick of time with an inside rush to secure a three-quarter-length win.

On Saturday, Saez again dictated terms with Summer Romance in the 1 1/8-mile inner-turf test, but Althiqa, under Manny Franco, rallied wide down the lane to win by the same margin.

In keeping with the theme, Althiqa matched up her 101 Beyer Speed Figure, while Summer Romance paired her 100 figure, according to the Daily Racing Form.

The Charlie Appleby-trained duo arrived in New York in May for their two-race mission under the care of traveling assistant Sophie Chretien.

Chretien credited Franco, who secured his fourth career Grade/Group 1 win at the Spa, for his picture-perfect ride.

“It was great,” Chretien said. “I just said to make sure she had a target; she's a good horse, and she'll give everything for you. He rode her very confidently and did everything right and it paid off at the end. He's a good rider.”

“Summer Romance did everything right, it's just that Althiqa is improving,” Chretien said. “They both ran great. As a mare, Althiqa is getting stronger with age. The pace was perfect for her and she loved coming from behind. Everything worked a treat for her.”

Chretien said the winning moment was made that much better in front of a paid Saratoga attendance of 25,520.

“We haven't seen atmosphere like this for a while. It was great to see that,” Chretien said.

Chretien said the fillies will return to Appleby’s care in England next week.

“They're both doing just fine,” Chretien said. “They'll stay here and relax for a couple days and they will be leaving on Tuesday morning to fly back to the U.K.”