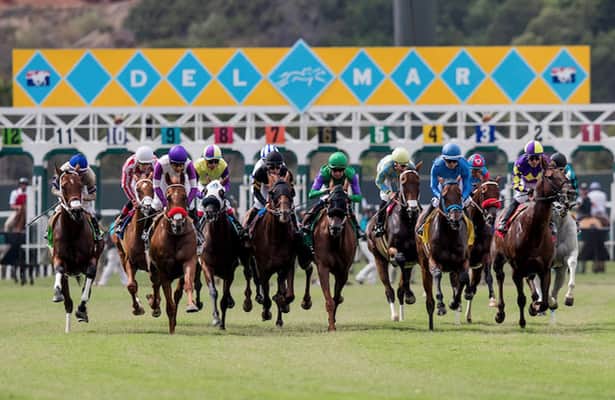 The 82nd edition of the Grade 1, $400,000 Hollywood Derby will highlight a special racing card Saturday at Del Mar on the penultimate day of the sport for the 2022 Bing Crosby season.

The Hollywood Derby will have its ninth presentation at Del Mar at its 1 1/8-mile distance on the lawn. The first local running of the feature in 2014 saw 3-year-old champion California Chrome win it handily and cement his bid to be Horse of the Year.

This time around, there are 11 well-respected 3-year-olds with their eyes on the money and prestige the race offers, but there are no standouts in the lineup. Five East-based horses, including three out of the barn of conditioner H. Graham Motion, will try their luck in the turf test, and it appears likely that one of them may go postward the favorite.

A pair of Hall of Fame conditioners – Shug McGaughey and Todd Pletcher – have runners entered that may draw the most mutuel action in Celestial City (McGaughey) and Wit (Pletcher). Both well-bred colts are stakes winners in the East and have drawn top local riders – Ramon Vazquez on Celestial City and Flavien Prat on Wit. The race will be run as the ninth and final event on the day’s card.

The Jimmy Durante, formerly known as the Miesque Stakes when it was contested at Hollywood Park, has drawn a field of 12 and it, too, has its fair share of shippers set to try their luck locally.

Trainer Motion has brought in Pallotta Sisters from Delaware Park, conditioner Simon Callaghan will send out Decorated My Life, a Irish filly making her U.S. bow, and eastern kingpin Chad Brown has Liguria in from New York for her first taste of stakes competition. The Jimmy Durante goes as Race 7 on the program.