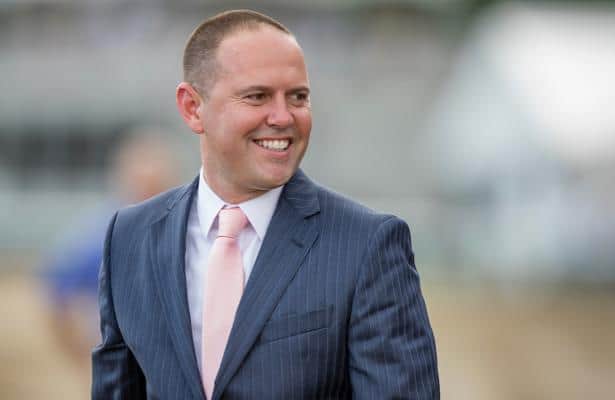 After training the last three winners of the Arlington Million (G1), Chad Brown is likely to have the favorite for its replacement Aug. 14, when he sends three-time Grade 1 winner Domestic Spending against at least one U.S. rival and two international shippers in the $600,000 Mister D. Stakes (G1) on the turf at Arlington Park.

According to the International Racing Bureau liaison service, horses expected from Europe for the 1 1/4-mile Mister D. include four-time group winner Armory for trainer Aidan O’Brien, who won the Arlington Million twice, and two-time group victor Space Traveller, who will be looked after by Brendan Walsh on behalf of trainer Richard Fahey.

Zulu Alpha, who was fifth last month in the Arlington Stakes (G3), is also expected in the Mister D., according to the track’s racing office. He will be looking for his first Grade 1 score for trainer Mike Maker since he won the 2020 Pegasus World Cup Turf Invitational (G1).

Domestic Spending is on a four-race winning streak that began last Aug. 15 with the Saratoga Derby. He also won the Hollywood Derby (G1) last November at Del Mar, finished in a dead heat for first with Colonel Liam in the Turf Classic (G1) on Kentucky Derby day and scored in the Manhattan (G1) on the Belmont Stakes undercard.

Patrick Sarsfield, a runner-up at Royal Ascot in this year’s Wolferton Stakes, was considered a possible starter. But the IRB said Monday that trainer Joseph O’Brien, Aidan’s 28-year-old son, would not be shipping the 5-year-old gelding.

Adrian Beaumont of the IRB said three other horses based in Europe are also probables for what is still being called “Million Day.” All trained by the O’Brien family, they will be shipped Sunday after starting the quarantine process in Ireland. Space Traveller was scheduled to be flown early this week to Indianapolis on the way to clearing quarantine at Churchill Downs before being sent to suburban Chicago.

Belmont Oaks Invitational (G1) winner Santa Barbara will represent O’Brien in the $400,000 Beverly D. (G1), a 1 3/16-mile race for fillies and mares. The 3-year-old Camelot filly will be joined by Grade 1 winner Shale, a 3-year-old by the late Galileo who is trained O’Brien’s 23-year-old son Donnacha.

Looking for his sixth consecutive victory in the race, Brown will saddle Lemista, a 4-year-old by Raven’s Pass who won two group races in Ireland. She was eighth last out in the Diana (G1) at Saratoga. The Arlington Park racing office also expects Mean Mary, a five-time graded-stakes winner for trainer Graham Motion, to be in the Beverly D. field.

So far only Battleground, a colt by War Front who has won a Group 2 for Aidan O’Brien, is confirmed for the $300,000 Bruce D. (G1). O’Brien won the one-mile race for 3-year-olds four times when it was known as the Secretariat. It was under that name that Brown was its most recent victor in 2019 with Valid Point.

After being canceled last year because of COVID and a dispute between Illinois horsemen and track management, the Grade 1 races for “Million Day” had their purses cut for what is expected to be their final running. Churchill Downs Inc. announced last year it would not commit to racing beyond this fall at Arlington Park, which it intends to sell to developers.