See mare from Japan who cannot be ignored in Breeders’ Cup 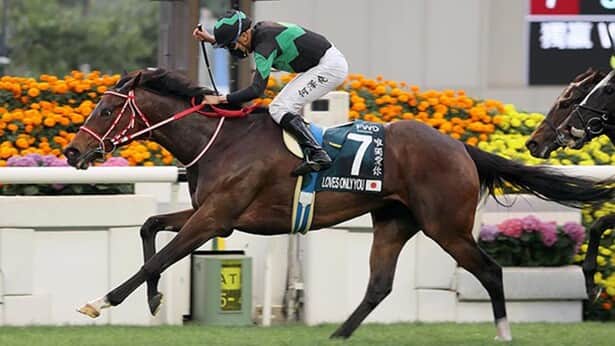 A 5-year-old mare who was a Group 1 winner last spring in Hong Kong may be the best hope for a Japan-based horse to break through for the first time ever in the Breeders’ Cup.

Sired by Deep Impact, owned by DMM Dream Club and trained by Yoshito Yahagi, Loves Only You is already 5-1 in futures betting to win the 1 3/8-mile, $2 million Filly & Mare Turf. That is if she does not go against males in the 1 1/2-mile, $4 million Turf.

“They will decide once they know more about who else is coming,” said Kate Hunter, who is the Breeders’ Cup representative based full time in Japan.

Considering Loves Only You’s narrow third-place finish to Mishriff in the 1 1/2-mile Dubai Sheema Classic (G1), her victory in the 1 1/4-mile Queen Elizabeth II Cup (G1) in Hong Kong and a close second-place finish last out in the 1 1/4-mile Sapporo Kinen (G2), mixing it up with the boys would be more in keeping with what she has done in her last five races.

“Loves Only You is definitely the headliner based on her promising performance in Dubai and strong win in Hong Kong,” Hunter said. “She seems to have retained most of that form in her last race, finishing solidly.”

Hunter said Tuesday that five of the other six horses from Japan who were expected to join Loves Only You in America include:

A 2-year-old colt, either Jasper Krone or Jasper Great, will complete the group and target the Breeders’ Cup Juvenile.

Marché Lorraine, a 5-year-old mare sired by Japan Hall of Famer Orfèvre, has been training up to the Distaff since she won a listed stakes at Monbetsu-Hokkaido. She and Loves Only You are stablemates under the supervision of Yahagi, a gregarious horseman who trained 2019 champion Lys Gracieux and 2020 Japan triple-crown winner Contrail. Marché Lorraine is 25-1 in Distaff futures.

The rest of the horses are trained by Hideyuki Mori, who brought France Go de Ina across the ocean to finish seventh in the Preakness and eighth in the Belmont Stakes. Matera Sky and Jasper Prince are making their second trips to the Breeders’ Cup.

“Mori was the first person to see the potential there in America and jump aboard,” Hunter said. “I’m sure the past two years of coming to the U.S. are exactly what helped inspire the other trainers to head over, too.”

Mori brought Matera Sky to Santa Anita for the 2019 Sprint, where he finished eighth. Now 7, the Speightstown horse was 12th in the Dubai Golden Shaheen (G1) and most recently finished fifth in a listed stakes Aug. 9 at Morioka. Matera Sky is 33-1 in Sprint futures.

Also sired by Speightstown, 4-year-old colt Pingxiang has not raced since June 26, when he won a minor stakes at Hanshin for his second victory in a row.

Jasper Prince, a 6-year-old Violence horse, finished last in the 2020 Breeders’ Cup Sprint at Keeneland. He broke a seven-race losing streak last month with a listed-stakes victory at Chukyo.

The Juvenile candidates are both maiden winners for Mori. Jasper Krone, by Frosted, won his debut at Niigata before a pair of third-place finishes in sprint stakes this fall. He would be making his dirt debut if he were to start in the Breeders’ Cup. Jasper Great, by Arrogate, was a debut winner in a 1 1/8-mile dirt race Oct. 9, meaning the Juvenile would happen only 27 days after his first race.

Kuwada Yuga, second to Christophe Lemaire in the current Japan jockey standings, is expected to ride Loves Only You and most of the Mori horses. Fukunaga Yuichi, third behind Lemaire and Yuga, drew the assignment on Vin de Garde. Three-time British riding champion Oisín Murphy will be on Marché Lorraine. If Jasper Prince makes the trip, Hunter said a U.S.-based jockey would be recruited to ride him.

Hunter said Loves Only You, Marché Lorraine and Vin de Garde will be flown out of Japan on Friday and go directly to quarantine at Del Mar. The Mori-trained horses will be on a separate flight Oct. 29. They will quarantine at JetPets next to Los Angeles International Airport before being vanned to Del Mar.

The seven horses will be the most ever from Japan to take part in the Breeders’ Cup. The country had never before been represented by more than two starters in a given year.