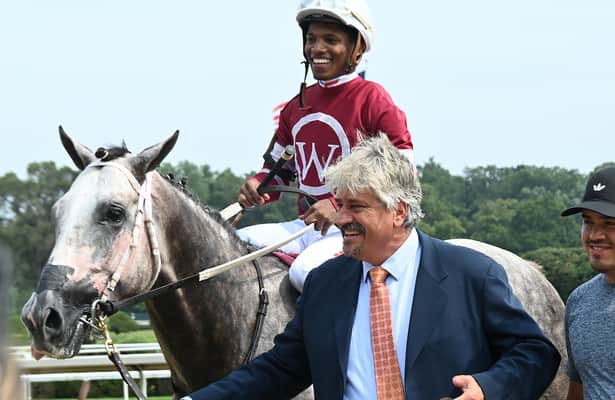 Stellar Tap already has a permanent place on Steve Asmussen’s Hall of Fame résumé. His victory in a seven-furlong race last month at Saratoga made Asmussen the winningest trainer in North American history.

Coming off that debut performance, the 2-year-old Tapit colt drew post 6 in a field of 11 and could wind up as the post-time favorite to win Saturday night in the Grade 3, $300,000 Iroquois Stakes at Churchill Downs.

It is not only the first points race on the road to the 2022 Kentucky Derby, but the 1 1/16-mile Iroquois is also a “win and you’re in” for the Breeders’ Cup Juvenile on Nov. 5 at Del Mar.

Early speed should not be lacking in the Iroquois. Stellar Tap dropped his gauntlet Aug. 7 when he drew off by 5 1/4 lengths in his historic triumph. Bought by Ron Winchell for $250,000 at last year’s Keeneland September yearling sale, he was ridden by Ricardo Santana Jr., who will have the assignment again Saturday.

*Rating is based on HRN fan votes, which rank the Top Active Horses in training.
Although the Iroquois marks the traditional start of the Kentucky Derby trail, the race has never produced a winner in America’s biggest race. Lookin At Lee, trained by Asmussen, came closest, finishing second in both the 2016 Iroquois and the 2017 Derby.

11 fillies are in Pocahontas

Two fillies that made noteworthy early impressions this summer should be among the favorites for the 1 1/16-mile, $300,000 Pocahontas (G3), an automatic qualifier for the Breeders’ Cup Juvenile Fillies and a points prep for the 2022 Kentucky Oaks.

Joyrunner, who is 2-for-2, will start from the outside post in Saturday’s field of 11. Trained by Laura Wohlers and ridden by Joe Ramos, the Gun Runner filly graduates from a pair of victories at Indiana Grand.

Hidden Connection won by 7 1/2 lengths in her debut Aug. 17, going 5 1/2 furlongs at Colonial Downs. She drew post 9 for the Pocahontas. Bret Calhoun trains the Connect filly who will be ridden by Reylu Gutiérrez.