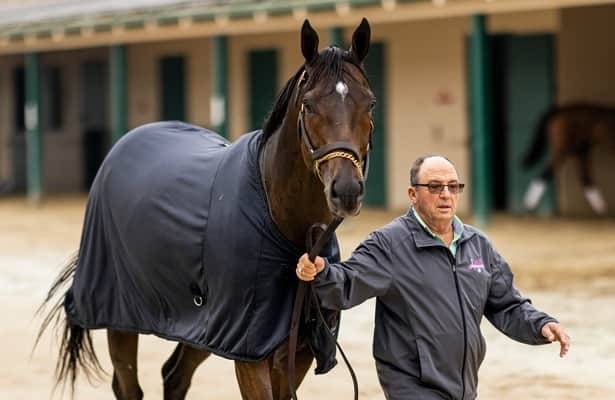 The top of the North American trainer earnings list in 2021 looked much as it did in 2020.

Of the 10 trainers who led their peers in 2020 earnings, only the federally indicted Jason Servis did not also crack the top 10 in 2021. Brad Cox led the list, followed by Steve Asmussen and Chad Brown.

There was movement further down the trainer earnings list, especially among those based in Kentucky, where purse money continues to grow.

Horse Racing Nation examined Equibase data to find trainers who climbed the money list in 2021. We considered those in the top 50 of North American earnings this season and compared where they ranked among peers in 2020.

To be eligible for this list, trainers had to start at least one runner on North American soil. For those who did, earnings from the Saudi Cup and Dubai World Cup cards were also considered.

Hartman made his Kentucky Derby debut in 2020 with Necker Island, saddling the son of Hard Spun to a ninth-place finish. He started that runner eight times in 2021, with a Bet on Sunshine Stakes win at Churchill Downs highlighting three wins. Hartman also won stakes races at Fair Grounds and Oaklawn Park.

Lynch tallied a trio of graded wins this season, including with Gift List in the Edgewood Stakes (G2). The filly blew past heavily favored Aunt Pearl down the Churchill stretch to score a 4 1/4-length win on the Kentucky Oaks undercard. Lynch won two $500,000 stakes during Kentucky Downs’ lucrative meet.

Arnold is another trainer who took advantage of big purses at Kentucky Downs as Gear Jockey captured the winner’s share of a $1 million prize in the Turf Sprint Stakes (G3). The Calumet Farm homebred finished the year with a sixth-place run in the Breeders’ Cup Turf Sprint. Arnold also won Grade 3 races in 2021 with Leinster and Navratilova.

Rivelli likely will go down in Illinois racing history as the last person to win a training title at Arlington Park. His runners won 84 races in 2021 at the Chicago-area track, while second-place trainer Brittany Vanden Berg saddled 26 winners. Rivelli scored an Arlington Stakes (G3) victory with Bizzee Channel.

D’Amato ranked eighth among his North American peers in 2021 with 15 graded-stakes wins. Going Global took five such races, including the Del Mar Oaks (G1), in a year where she produced an 8: 6-1-0 record. D’Amato’s top male runner was Say the Word, who scored Grade 2 wins in Keeneland’s Elkhorn Stakes and Del Mar’s Hollywood Turf Cup Stakes.