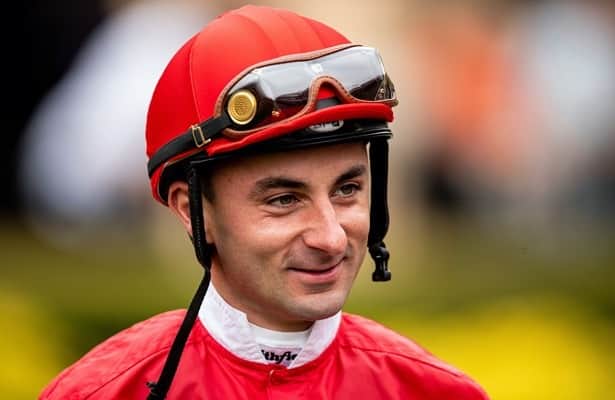 Horse Racing Nation examined Equibase data to find jockeys who climbed the money list in 2021. We considered riders in the top 50 of North American earnings this season and compared where they ranked among peers in 2020.

To be eligible for this list, jockeys had to make at least one start on North American soil. For those that did, earnings from the Saudi Cup and Dubai World Cup cards were also considered.

Two jockeys in this year’s top 50, David Egan and William Buick, did not make any North American starts in 2020 and therefore are not listed here.

Pedroza took part in his first Kentucky Derby with O Besos, who finished fifth at 42-1 odds behind a quartet of Grade 1 winners: Medina Spirit, Mandaloun, Hot Rod Charlie, and Essential Quality. He also earned his first graded win in the Fair Grounds Stakes (G3) aboard Captivating Moon. Pedroza continued his dominance of racing in The Hoosier State, winning the Indiana Grand riding title for the third time in his career.

Gutierrez is ending 2021 on a high note, winning seven races at Fair Grounds, including five stakes events, between Sunday and Monday’s racing cards. His 18 victories during the New Orleans track’s current meet ranks second only to Colby Hernandez’s 21. Gutierrez won Churchill Downs’ Pocahontas Stakes (G3) aboard Hidden Connection, then finished fourth with her in the Breeders’ Cup Juvenile Fillies.

Hernandez collected the first four graded stakes wins of his career this season, all in Grade 3 company. Two came with Change of Control, who took Belmont Park’s Intercontinental Stakes and Keeneland’s Franklin County Stakes. Hernandez is based in the winter at Fair Grounds, where he leads the rider colony with 21 wins.

Arrieta rode primarily in Arkansas and Kentucky and collected the highest earnings total of his young career. The 50 wins he collected during the 2021 Oaklawn Park meet ranked third behind only Ricardo Santana Jr. (68) and David Cabrera (62). Arrieta will ride Kavod on Saturday at Oaklawn for trainer Chris Hartman in the Smarty Jones Stakes, a points-paying 2022 Kentucky Derby prep.

Bocachica was far and away the top jockey this season at Charles Town, leading that colony in wins (256) and earnings ($5 million). He was at his best during the West Virginia Breeders’ Classics card, winning aboard eight of his nine mounts. Bocachica’s eight wins on a single day bested the previous Charles Town record of seven.

Silvera is based at Parx, though he made occasional starts in 2021 in New York and at other tracks in the Mid-Atlantic. He led all jockeys at the Bensalem, Pa., track this season in wins (217) and in earnings ($5.28 million). Silvera’s mounts finished third in four different Grade 3 races as he pursues his first graded stakes win.

Beschizza held his own this season on the competitive Kentucky racing circuit, setting career bests in earnings and wins (149). He won two graded stakes races, Churchill’s Regret (G3) with Gam’s Mission and the Ben Ali (G3) aboard Silver Dust at Keeneland. Beschizza will look to take the Fair Grounds path to the 2022 Kentucky Derby as he did in 2020 with Enforceable, who finished seventh.

Pennington racked up (167) wins this season to bring his career total to (2,765) as he approaches 3,000. He booted Leader of the Band home to a Monmouth Oaks (G3) win and scored in the Greenwood Cup Stakes (G3) at Parx aboard Magic Michael. Pennington ranked second this season at Parx in both wins (158) and earnings ($4.98 million) behind Ruben Silvera.

Murrill is another jockey on this list who winters at Fair Grounds before riding the rest of the season on the Kentucky circuit. He made seven starts this season aboard 2020 Kentucky Derby runner Necker Island, winning a trio of races with the 4-year-old at Churchill. Murrill won stakes races in New Orleans with Elle Z and Saints N Muskets.