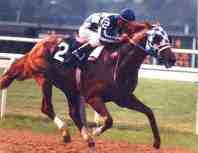 The Maryland Racing Commission voted Tuesday afternoon in a special hearing at Laurel Park that 1973 Triple Crown winner Secretariat, who set records that still stand at the Kentucky Derby and the Belmont States, also set the record in the Preakness Stakes at Pimlico Race Course 39 years ago.

In a unanimous 7-0 decision, the official time of the Preakness was changed from 1:54 2/5 to 1:53. Secretariat is one of 11 thoroughbreds to win the Triple Crown, with victories in the Kentucky Derby, Preakness and Belmont as a 3-year-old.

The Maryland Racing Commission said last week it would investigate the official timing of the race at the request of Secretariat’s owner  Penny Chenery and Pimlico president Tom Chuckas.

“I didn’t know if it was appropriate to cheer but I couldn’t help myself,” Chenery said. “This is a big day.”

For more than two hours, the racing commission heard testimony, backed by modern technology to prove Secretariat’s time was actually faster than the Preakness record of 1:53 2/5, set by Tank’s Prospect in 1985 and matched by Louis Quatorze (1996) and Curlin (2007).

“Justice was served,” Chuckas said. “The Secretariat team made a compelling case that he ran the race in 1:53 flat and added the Preakness record to his resume. This is terrific news for Mrs. Chenery, who has been diligent in her fight for nearly 40 years, and the entire sport of horse racing.”

The electronic timer in use at Pimlico for the 1973 Preakness recorded a winning time of 1:55—a clocking that quickly became the source of controversy after two independent clockers from the Daily Racing Form had individually hand-timed the race at a much faster 1:53 2/5. In the days following race, the Maryland Racing Commission stewards and later the racing commission concluded that there were “extenuating circumstances” attendant to the electronic timer's recording.  As a result, the official time was subsequently changed to that reported by Pimlico’s official hand clocker -- 1:54 2/5.

“It is wonderful for the sport to remove an asterisk and wonderful for the legacy of Secretariat and his fans, who believed he set the record in all three Triple Crown races,” said Leonard Lusky, who represented Chenery at the hearing. “This was a labor of love and it was so important because it was Secretariat and the Preakness, one of the landmark events in horse racing.”