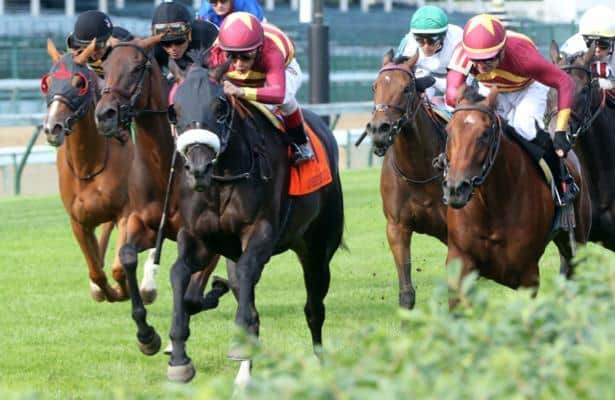 The 5-year-old Secret Message went off at 25-1 odds for trainer Graham Motion in the Mint Julep, a 1 1/16-mile trip on the turf for older fillies and mares. Juliet Foxtrot garnered 8-5 favoritism from the rail, with Beau Recall, Nay Lady Nay and Varenka among the 14-horse field’s other graded stakes winners.

Mitchell Road came in from the far outside to set fractions of :23.7 and :48.27. The favorite sat just behind her in second, while Secret Message sat mid-pack on the outside.

Turning into the stretch, Mitchell Road and Juliet Foxtrot dueled up front, while Zofelle came up to challenge the top two. As Zofelle put her nose in front, Secret Message gained ground six-wide under jockey John Velazquez.

"I was just sort of biding time there on the outside and she kept finding her stride down the lane and was able to get up late," Velazquez said.

Secret Message reached Zofelle in the final yards before the wire, as did late-charging La Signare to that pair’s inside. A photo finish determined the top three as Secret Message followed by La Signare and then Zofelle.

“Both horses ran such a huge race,” Walsh said. “We ran second and third by a head. Those are really tough beats when you lose by that close of a margin but we are really proud of both of their efforts.”