Second to Charlatan, Basin has Belmont, Blue Grass as options 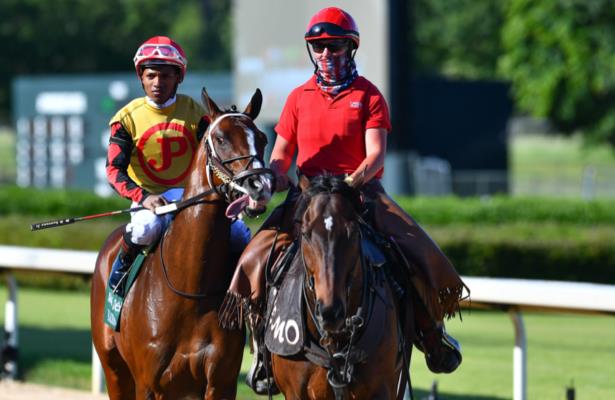 Mentioned among the early potential contenders for the June 20 Belmont Stakes, Basin may ultimately have a different nine-furlong race on his agenda.

“You never know until he tells us he wants to go any farther or can’t compete,” Poncik said. “Then we’ll start scaling back to what we know he’s good at.”

Basin, who dominated Saratoga’s seven-furlong Hopeful (G1) as a 2-year-old, put forth his best effort at age 3 last time when chasing Charlatan in second throughout a merry-go-round division of the Arkansas Derby (G1).

The Steve Asmussen trainee returned to the work tab Friday morning with an easy half-mile breeze in 53 seconds at Oaklawn Park. Basin will ship this weekend to Churchill Downs to continue his training.

Poncik has heard Keeneland could aim for the Blue Grass in mid-July as part of an abbreviated meet after the Lexington, Ky., track canceled its spring races near the start of the COVID-19 pandemic.

If and when the Blue Grass runs, it will pay out Derby qualifying points on a 100-40-20-10 scale to its top-four finishers. With 50 points, Basin ranks 10th on the leaderboard with more than three months until the Sept. 5 race.

“He’s young. He actually just tuned 3,” Poncik said of the May 12 foal. “He’ll get bigger and stronger and we’ll see what happens.”

Basin made the Arkansas Derby his third start this season after missing the rest of his 2-year-old campaign after the Hopeful with a muscle strain. The colt also ran third in the Rebel Stakes and fourth in the Oaklawn Stakes.

“His last race took a lot out of him. He ran his eyeballs out behind Charlatan,” Poncik said. “He finally got a good trip the third time out. The first two compromised him — both times on the far turn we got in trouble. Obviously Charlatan’s just a step above us at this point, but I want to keep going with the Derby trail.”