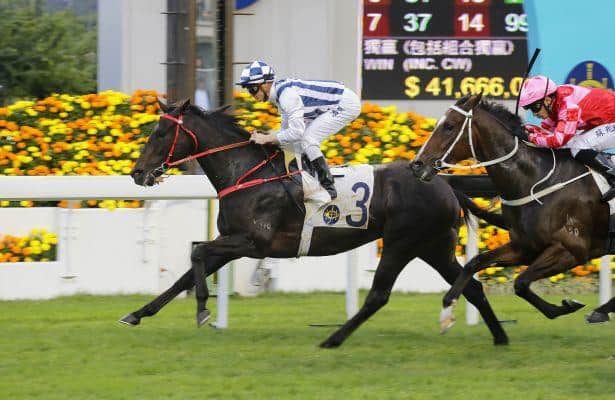 “I’ve had a big opinion of him from day one,” Rawiller said of the Danny Shum-trained gelding. “He’s a horse that’s still on the way and I think he’s in a race that he can be competitive in.”

The Australian import heads into the first leg of Hong Kong’s Four-Year-Old Classic Series with two wins on the board from three Hong Kong starts. Seasons Bloom also won a 1200m three-year-old maiden at his second and final start before shipping to Sha Tin; Pakenham was the venue, Brendan McCarthy the trainer and Le Capitaine his given moniker back then.

Rawiller has kept a close eye on the horse ever since he partnered in a Sha Tin gallop in September. Two smart barrier trials followed, but when it came to race day, Silvestre de Sousa took the reins and then, for two impressive wins, Zac Purton. Now, with Purton otherwise engaged, Rawiller gets his chance.

“I did a lot of work on Seasons Bloom early in his Hong Kong career, before he raced here,” Rawiller said. “He went to the races and he was desperately unlucky first-up and then his next two runs, with that experience, he was able to show his potential.”

Seasons Bloom heads into Sunday’s feature on a mark of 83 with only one entrant, Baba Mama (80), rated his inferior. On official figures, he is considered to be 31 pounds behind top-rated Rapper Dragon going into a set-weights race.

“What’s got to be taken into account is that he hasn’t had the chance to get any higher in the ratings,” Rawiller said. “He’s only had three runs. So that’s a little bit misleading. I think he has points up his sleeve, without any worry in the world.”

That certainly looked to be the case when Seasons Bloom surged past rivals to score a cheeky half-length win in a 1400m Class 3 handicap on 1 January, conceding weight to the useful Regency Bo Bo in second and subsequent wide-margin winner Beat The Clock, a length back in third. And the clock backed the view that Shum’s charge had unleashed a classy turn-of-foot – his final 400m registered at 21.99s.

“I can go right back to one day when I trialled him here over half a mile or 1000 metres down the straight. He sat back off a pretty good bunch of young horses and when I let him extend 100 out he picked up really well. He’s just continued to raise the bar so I don’t think he’s got to where he’ll get to yet.”

With several of Sunday’s probable rivals already G1 tested – among them Rapper Dragon, Beauty Generation, Eagle Way, Helene Charisma and Rodrico – the question of whether or not Seasons Bloom is ready for a Classic Mile test is a valid one.

“I can’t agree or disagree with that,” Rawiller said. “He’s very professional, he’s a racehorse. I’m sure he lacks that little bit of experience of some of these seasoned horses but his mental attitude and strength are what will take him a long way.”