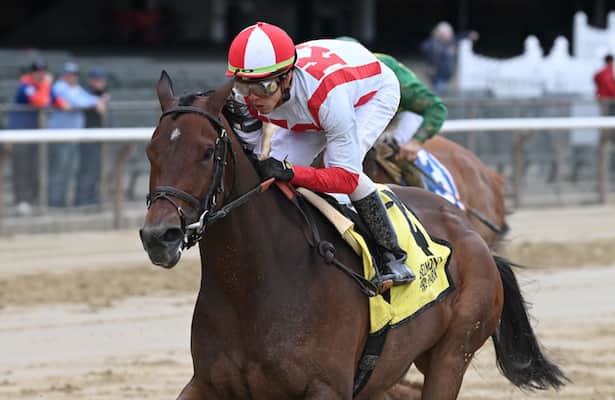 Search Results stalked and pounced to a three-length score in Sunday’s Grade 2, $200,000 Ruffian, a one-turn mile for older fillies and mares, at Belmont Park.

Search Results, a 4-year-old Flatter dark bay owned by Klaravich Stables, won 4-of-6 sophomore starts, including graded scores in the Gazelle (G3) last April at Aqueduct Racetrack and the Acorn (G1) in June over Big Sandy. Those winning efforts enveloped a close runner-up effort to Malathaat in the Kentucky Oaks at Churchill Downs.

The talented filly entered the Ruffian from a distant third-place finish in her seasonal debut in the seven-furlong Distaff Handicap (G3) on April 9 at the Big A, but returned to winning from with a sharp performance under jockey Irad Ortiz Jr.

“Last time, she came from a layoff going too short maybe. But today was great,” Ortiz said. “I saw it was time to go (at the top of the stretch) and I asked her and she responded very well. As soon as I asked her, she took the lead and she did her thing. She’s a really nice filly.”

Lady Rocket, who captured the Go for Wand Handicap (G3) in December at Aqueduct, led the six-horse field through splits of 22.67 and 45.33 seconds over the muddy and sealed main track as Search Results kept close watch from second position in front of Make Mischief.

Royal Flag, who brushed the gate at the break, settled at the back of the pack under Joel Rosario and advanced into contention as Search Results made a menacing move outside of Lady Rocket late in the turn.

Search Results was in front at the stretch call and widened her margin with ease to cross the wire in a final time of 1:34.88 as Royal Flag made her six-wide bid, closing down the center of the track and overtaking Lady Rocket in the final sixteenth to complete the exacta by 1 1/2-lengths. Rounding out the order of finish was Bank Sting, Make Mischief and Zaajel.

“She felt good. She’s growing and has more maturity. She sat good and perfectly relaxed and waited for me,” Ortiz said.

W.S. Farish homebred Royal Flag enjoyed a memorable 2021, winning 2-of-5 starts, including nine-furlong scores in the Shuvee (G3)  in July at Saratoga Race Course and the Beldame Invitational (G2) in October at Belmont. She completed her campaign with a rallying fifth, defeated 1 1/4-lengths in the Breeders’ Cup Distaff in November at Del Mar.

Rosario said Royal Flag, who finished a close third in the Personal Ensign (G1) in August at the Spa, performed admirably in her seasonal debut.

“She looked like she was getting better at the end and the other horse ran an incredible race,” Rosario said. “She tried to catch up to her, but it was the first time she ran since she ran in the Breeders’ Cup.”

The victory topped a successful weekend at Belmont for Brown, who won a pair of Grade 2 stakes Saturday, taking the Sheepshead Bay with Virginia Joy and running one-two in the Fort Marcy with L’Imperator and Sacred Life, respectively.