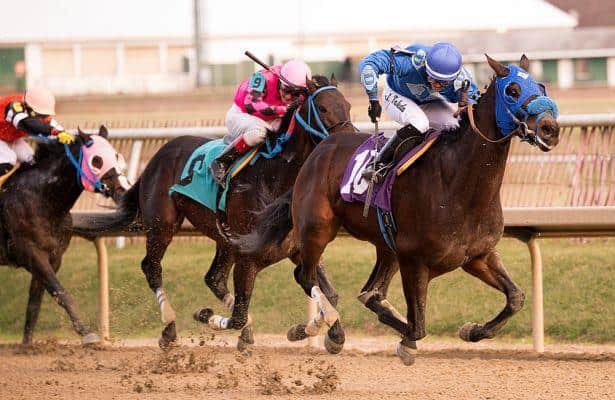 Photo: Jim McCue/Maryland Jockey Club
Trainer Phil Schoenthal is looking for a big performance out of his 5-year-old gelding and Fire Plug Stakes winner Sonny Inspired in Saturday's $75,000 Ben's Cat Stakes at Laurel Park.
Owned by D. Hartman Thoroughbreds, Sonny Inspired enters the six furlong Ben's Cat off a third-place finish Feb. 15 in the seven furlong General George (G3) after his victory Jan. 16 in the Fire Plug.
"He's just been getting better and better since the Fire Plug," Schoenthal said. "Frankly, he's been doing better in the last few weeks than he ever has been in his life, as far as the way he's feeling, training and eating. I couldn't be happier with where's he's at right now. He's doing outstanding and I'm expecting him to run his A-plus race."
Along with Sonny Inspired, a Maryland-bred son of Artie Schiller who has earned $316,324, Schoenthal will saddle also saddle Arrogant Officer, a $12,500 claim at Parx last summer, and Gursky, a son of Lemon Drop Kid who won a starter allowance by 4 1/2 lengths at Parx March 8 after finishing second in two allowance races to start his 4-year-old campaign.
"He's in good form as well," said Schoenthal of Gursky who will be making his stakes debut. "Off his last race he certainly earned the right to tackle the big boys. When your horse is sharp and in good form, you have to run them when they're right. We'll take a shot and try to get a piece of it."
Sonny Inspired and Gursky will be joined by five others in the gate including Maryland Million Sprint winner Jack's in the Deck, seventh last time out in the Dave's Friend, D C Dancer, third in the Maryland Million Sprint, and Any Court Inastorm, sixth in the General George, and Final Prospect, fourth last time out in the Final Plug.

NOTES: Live racing returns to Laurel Friday with a 1:10 p.m. first race post and a Pick 5 carryover of $30,341.03…The Harrison E. Johnson Memorial, scheduled for Saturday, failed to fill. The race could be rescheduled...Upcoming events at Laurel include Racing 101 Day at the Races, a day-long, behind-the-scenes look at Thoroughbred racing with a morning spent on the backstretch, a trip to the jockey’s room and winner’s circle, and a delicious buffet in the Terrace Dining Room. This fun-filled day is $55 per person.