Scarlett Sky upsets Fire At Will in Keeneland's Transylvania 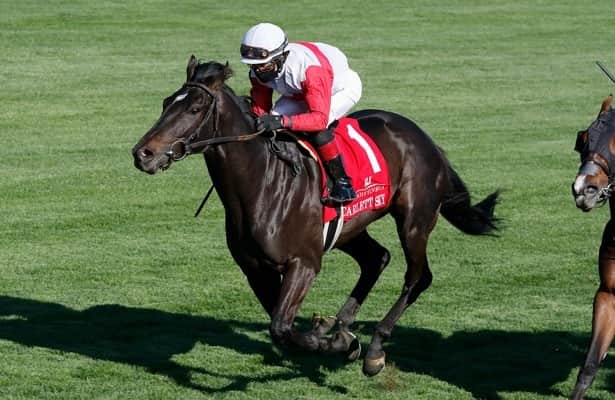 Breeders’ Cup hero Fire At Will’s return to the Keeneland turf Friday was spoiled by Scarlett Sky, who took the Grade 3, $150,000 Transylvania Stakes for 3-year-olds.

The Transylvania marked Fire At Will’s first start on the lawn since last November, when he scored a 30-1 upset of the Breeders’ Cup Juvenile Turf at Keeneland. He tried the Kentucky Derby trail in February but was eighth in Gulfstream Park’s Fountain of Youth Stakes (G2).

Fire At Will garnered 11-10 favoritism in the 1 1/16-mile Transylvania, and got away well to set the early lead under jockey Tyler Gaffalione. He went through the first three panels in 24.63, 49.83 and 1:14.32 while pursued by Earls Rock and Barrister Tom.

Scarlett Sky meanwhile sat sixth of seventh through the early stages under jockey Joel Rosario. He swung six-wide into the lane, soared home on the outside and scored by a half-length over Palazzi, who passed Fire At Will for second place in the stretch.

“We were all getting a little bit nervous,” assistant trainer Lindsay Schultz said of Scarlett Sky’s late rally. “Shug asked (Joel) to be patient and when that horse had room to make a run, he sure did.”

Trainer Mike Maker said that Fire At Will “had everything his own way and was third best today. No excuse.”

The $500,000 American Turf (G2) on the Kentucky Derby undercard will be Fire At Will’s next target, Maker said.