Say Florida Sandy's distance a fit for Gold for the King 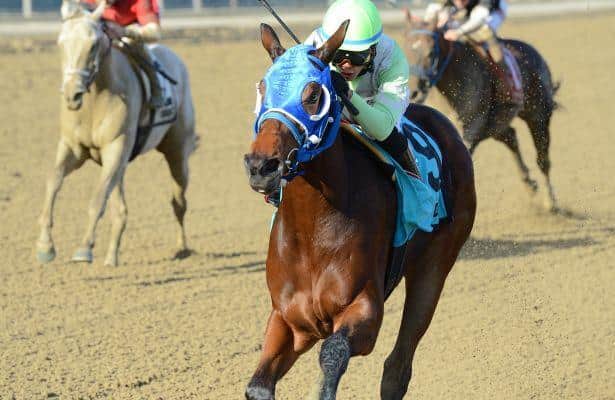 A contentious group of nine sprinters will look to start their respective 2019 campaigns with a stakes victory in the $100,000 Say Florida Sandy going seven furlongs for New York-breds, 4-years-old and up on Saturday at Aqueduct Racetrack.

Trainer Charlie Baker will be represented in the Say Florida Sandy by five-time stakes winner Gold for the King for owner Francis Paolangeli. The 5-year-old Posse gelding posted a record of 2-2-1 from seven starts in 2018 and arrives at Saturday's test from a prominent third on December 23, defeated just three-quarters of a length in the six-furlong Gravesend.

Gold for the King has two wins and one runner-up effort in five starts from seven furlongs, including a 9 ¼ length score in the 2018 renewal of the Thunder Rumble division of the New York Stallion Series Stakes.

Baker said he is hoping Gold for the King will get back on track on Saturday.

"He's coming into this race in good shape," said Baker. "He was right there running hard in the Gravesend and it just didn't go our way that day, but since then he's been training well, and I think the distance fits him."

With meet leading rider Junior Alvarado aboard, the pair will leave from post 2.

Trainer Michelle Nevin, who won the inaugural running of the Say Florida Sandy last year with My Boy Tate, will saddle Honor Up for Saratoga Racing Partners. A dark bay son of To Honor and Serve, the 4-year-old colt was transferred to Nevin from the barn of Hall of Fame trainer Bill Mott following the Saratoga meet, and has since gone on to win two of three starts.

Honor Up, in search of his first career stakes victory, arrives at the Say Florida Sandy from an allowance win on December 15 at Aqueduct that earned a 95 Beyer Speed Figure.

"When we got him, he was in great shape," said Nevin. "We decided to cut him back and run him at shorter distances and it seems to have made a difference. We really like him going seven-eighths. We knew he always possessed speed, but in his last race he also showed how versatile he is coming from off the pace, against the rail and taking dirt. We thought this was the right spot to put him back in stakes company."

Honor Up will depart from post 9 with Manny Franco up.

Syndergaard will be looking to win his first stakes race since capturing the Funny Cide as a juvenile for owners Eric Fein, Christopher McKenna, Harris Fein and Jerry and Guri Walia.

Trained by John Terranova, the now 5-year-old son of Majesticperfection showed flashes of brilliance as 2-year-old, most notably finishing second by a nose in the Grade 1 Champagne. Syndergaard was transferred to Terranova's barn following the 2017 Saratoga meet and has begun to show signs of his old self, most recently winning an optional-claiming race by a nose on December 15 at Aqueduct that garnered a 94 Beyer number.

"He came out of this last race really well," said Terranova. "We always knew he was talented and looking at his race in the Champagne we know he can get a mile. We feel this is a good distance for him. After he was transferred to us, he had a couple of hiccups in his training which we were able to get through and you could see the talent he has in last race. We're looking forward to building off that and we think this is a good spot for him to take that chance."

Reunited with jockey Rajiv Maragh, Syndergaard will leave from post 7.

Brad Cox will saddle Celtic Chaos, a two-time stakes winner in a career spanning 30 starts, for owners Zilla Racing Stables. The 6-year-old son of Dublin had one win from seven starts last year, but since being transferred to Cox for his last five starts, Celtic Chaos has raced competitively at the stakes level finishing third in both the John Morrissey and Hudson Handicap. Last time out, Celtic Chaos finished a respectable fourth in the Grade 3 Fall Highweight on November 22 at Aqueduct.

With Eric Cancel named to ride, the pair will leave from post 6.

Analysis: Which two Euros are best in the Belmont Derby?
Five European invaders made the trip overseas for...

Video: How to play the Indiana Derby all-stakes Pick 5
One of three derbies to be contested Saturday, the...