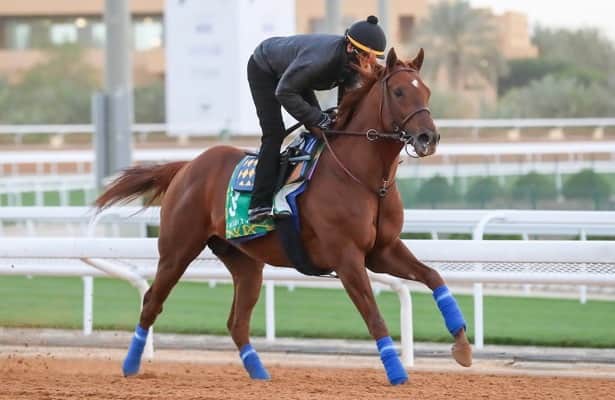 Two of the best horses in training square off Saturday with the world’s richest purse at stake.

Charlatan (7-5) and Knicks Go (5-2) are co-headliners for the second edition of the $20 million Saudi Cup. Those two and 12 others will go 1 1/8 miles at King Abdulaziz Racecourse in Riyadh, Saudi Arabia. Post time is scheduled for 12:40 p.m. EST.

Trained by Bob Baffert, Charlatan has never been beaten across the wire in four lifetime starts, though he was disqualified from a Grade 1 win in a division of last May’s Arkansas Derby due to a medication overage. Jockey Mike Smith will pilot the 4-year-old Speightstown colt, winner of Santa Anita’s Malibu Stakes (G1) two months ago in his last start.

Jockey Joel Rosario gets the call on Knicks Go, a three-time Grade 1 winner who is 4-for-4 since moving to the barn of trainer Brad Cox. The son of Paynter began his 5-year-old season last month at Gulfstream Park by winning the Pegasus World Cup Invitational (G1) in geared-down fashion.

Joining Charlatan and Knicks Go among the U.S. contingent will be Max Player (20-1), Sleepy Eyes Todd (20-1) and Tacitus (15-1). Max Player trainer Steve Asmussen and Tacitus conditioner Bill Mott had to find new jockeys for their entries after riders Umberto Rispoli and John Velazquez encountered travel issues and were unable to make the trip.

Among the nine international runners who will battle the Americans, Mishriff carries the shortest morning-line odds at 6-1. Trained by John Gosden, the 4-year-old won a Group 1 race last summer at Chantilly.

Here is a look at the 2021 Saudi Cup field (trainer and jockey in parentheses) with morning-line odds. Runners are listed first by their program number, then post-position number:

For more information on each of the Saudi Cup’s 14 competitors, visit HRN’s free past performances page.

Hosted by Nick Luck and Michelle Yu with the race call to be provided by Travis Stone, the international broadcast will originate from King Abdulaziz Racetrack with analysis from Tom Stanley and Hayley Moore.

FS2 will air “America’s Day at the Races” from 1-5:30 p.m. EST on Saturday with stakes coverage of Aqueduct and Laurel Park. TVG’s Saturday afternoon broadcast will include stakes from Gulfstream Park and Santa Anita.

Charlatan and Knicks Go are both among the horses on Keeler Johnson’s watch list. See which one Johnson picks to prevail Saturday.

Macatangay also goes in-depth into the Saudi Cup, seeing a backwheel key behind the two favorites as the ticket to play.

Knicks Go and Charlatan are 1-2, respectively, among older dirt males in Chip Gehrke’s Division Rankings. Gehrke examines the paths that have led these two runners to Saturday’s showdown.

Unlike some of his international counterparts, Saudi Cup runner Mishriff owns dirt experience after a second-place finish last year in the Saudi Derby. Assistant trainer Thady Gosden spoke about his boss and father John’s 4-year-old charge ahead of Saturday’s race.

This week on HorseCenter, hosts Matt Shifman and Brian Zipse make their Saudi Cup picks. And with no Kentucky Derby trail races on the schedule this weekend, the duo evaluates their top 10 Derby prospects 2½ months out from the First Saturday in May.

Knicks Go sits at No. 1 in the NTRA Top Thoroughbred Poll, which made its 2021 debut this week. Shifman shares how he voted in the poll.

Back in the day, which races were the richest? Johnson takes a trip down memory lane to recall high-dollar races of years past.

While Brad Cox saddles Knicks Go for the Saudi Cup on Saturday, the 2020 Eclipse Award winner for Outstanding Trainer has Essential Quality and Monomoy Girl on track for season debuts next weekend in Arkansas – weather permitting, of course.

Courtesy of the NTRA, here is a look at some of the other stakes races taking place Saturday:

With few remaining gaps on Hello Beautiful’s resume, trainer Brittany Russell will seek to achieve a significant milestone for both herself and her stable star when they go up against seven rivals in Saturday’s Barbara Fritchie. A graded win would fill an important blank on an otherwise stellar ledger for Hello Beautiful, a Maryland-bred daughter of Golden Lad that has won five career stakes and takes a three-race win streak into the richest and most prestigious event of the winter meet. Sporting a perfect 7-0 record over Laurel’s main track, Hello Beautiful is 3-for-4 at seven furlongs including wins in the Maryland Million Nursery and Safely Kept last fall to cap her sophomore campaign.

Grade 3 winner Majestic Dunhill, exiting a pair of disappointing efforts off a career-best performance, trades the South Florida sunshine for Maryland’s winter chill as he attempts to regain his winning form in the General George. Majestic Dunhill has placed in three stakes since, including the 2019 Polynesian at Laurel, and beat Share the Ride by a head to capture the Bold Ruler Stakes (G3) in the mud on Halloween at Belmont Park.

Edward Seltzer and Beverly Anderson’s Eres Tu is scheduled to seek her fourth straight comeback victory in Saturday’s Royal Delta. The 5-year-old daughter of Malibu Moon, who is undefeated since returning from an 18-month layoff and joining trainer Arnaud Delacour’s stable, will also pursue her second straight graded-stakes triumph. The homebred mare returned to action with a 2¼-length optional claiming allowance victory last October at Keeneland. She followed with a 1½-length score in the Nov. 26 Thirty Eight Go Go Stakes and a length triumph in the Dec. 26 Allaire DuPont.

A pair of talented California-breds, Mucho Unusual and Warren’s Showtime, head a competitive field of 10 older fillies and mares in Saturday’s Buena Vista Stakes, to be contested at one mile over the Santa Anita turf. Owned and bred by George Krikorian and trained by Tim Yakteen, Mucho Unusual seeks her third consecutive graded stakes victory at the current meeting. A winner of the Robert J. Frankel (G3) on Dec. 27, she again stalked the early pace and registered a three-quarter-length victory at 2-5 in the Megahertz (G3) on Jan. 18.