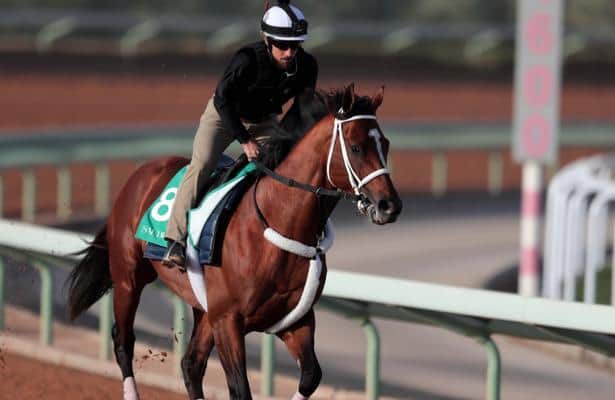 The richest event in the history of horse racing will take place in Riyadh, Saudi Arabia, on Saturday when they go postward for the $20 million Saudi Cup.

This nine-furlong contest run around one turn has lured top-class dirt performers from all over the world, including the United States, as race favorite Maximum Security leads a five-horse U.S. contingent.

The Saudi Cup figures to send some top runners as well to the Dubai World Cup (G1), which runs March 28. This race also falls a month after the Pegasus World Cup (G1) in America, forming a lucrative series of early season tests for older horses.

There are U.S. runners in on the Saudi Cup undercard at King Abdulaziz Racecourse, too, with this a guide of what to watch for and when to tune in.

Ghoul and Legends of War are part of the 1351 Cup sprinting on the turf; Billy Batts and Rowdy Yates represent America in the Saudi Derby; and Imperial Hint and Captain Scotty are prominent in the Saudia Sprint. Other Americans in the Saudi Cup itself are McKinzie, Midnight Bisou, Mucho Gusto and Tacitus, with the field and jockeys below.

The Saudi Cup on TV

Fox Sports 1 will exclusively broadcast the Saudi Cup with coverage beginning at noon ET leading up to post time at 12:40 p.m. ET. Prior to that, TVG will air the entire undercard, with first post time 8 a.m. ET. Wagering and a live stream are also available at TVG.com.

Are you looking for a better deal?  If so, we wanted to tell you about this new offer from TVG.  They are offering a $200 Risk Free Bet which is such a good deal, it is available to new members only.  Note this is only available in legal betting states.

All eight races Saturday are stakes, including an event for Arabians and one restricted to locally based Thoroughbreds.

Racing TV's Angus McNae offers four selections with a small caveat: Bettors should monitor how the dirt's playing, with replays available from a Friday card at King Abdulaziz Racecourse.

Saudi Cup: Maximum Security
This horse is a superstar, one who has not received the adulation he should have for a superb dirt career so far. Unfortunately he may always be remembered for being the first horse to be disqualified for interference after crossing the wire first in the Kentucky Derby. Make no mistake, though: He was the best horse in that race. By the way, he was the best in the Florida Derby (G1), the Haskell Invitational (G1) and the Cigar Mile (G1), too. Ignoring the demotion, he has won eight of his nine starts to date. With such a resume, he cannot be opposed here. Meanwhile, trainer Bob Baffert has proven over the years that he can win big prizes with traveling horses, and the Pegasus World Cup winner Much Gusto is a big player. He has improved since running second to Maximum Security in the Haskell last summer. The Dubai raiders have a tough ask here, particularly Benbatl, who is 1-for-1 on dirt but got a good trip off lesser competition. He will be needing a dirt style toughness that we don’t yet know he has. American domination for me here with an unfairly unsung hero in Maximum Security to win the big prize.
Saudia Sprint: Imperial Hint
I can also see American domination here. Both Captain Scotty and Imperial Hint are useful Dirt sprinters in the U.S., and this is theirs for the taking. Imperial Hint is a top-class sprinter who has his the board in the Breeders' Cup Sprint and can also boast a third in the Golden Shaheen (G1) in Dubai. It can be argued that he is slightly better than both of those results with multiple Grade 1 victories sprinting last season. Some of Imperial Hint's best efforts have come at Belmont Park, and this track is quite deep like that one. Imperial Hint can make it two big wins for American raiders.
Longines Turf Handicap: Cross Counter
At his best, Cross Counter is much better than these. This Dubai Gold Cup (G1) and Melbourne Cup (G1) winner knocked his head against the brick wall that is Stradivarius last season in the UK before finishing a close eighth when trying to win a second Melbourne Cup off top weight. There is a feeling of unfinished business with this horse, who is effective from a mile and a half to two miles. Add to that the fact that he will come here fresh and has clearly been targeted at this rather than having a run at the Dubai Carnival and you have a horse with a tremendous chance. His trainer, Charlie Appleby, is also in great form, operating at just shy of a 30 percent strike rate at Meydan this season. This is not a very strong staying contest, and he stands out here.
Mohammed Yousuf Naghi Motors Cup: Deirdre
I have long been a fan of this mare, all the more so after her fast win in the Nassau stakes at Goodwood last season. There, she flashed excellent final quarter mile speed to win going away. Once again she showed her talent in the Irish Champion Stakes (G1) where having been poorly positioned and hampered, she rallied home and can be rated as at least as good on the day as the winner, Magical. Her latest run in December of 2019 in the Hong Kong Vase was perfectly respectable at a time of year that may not have seen her at her best. Now off a freshening she can win here most deservedly against opponents who have not shown as much as her. She looks very solid bet here.
Imperial Hint Deirdre Cross Counter Maximum Security Saudi Cup Saudi Cup (2020)