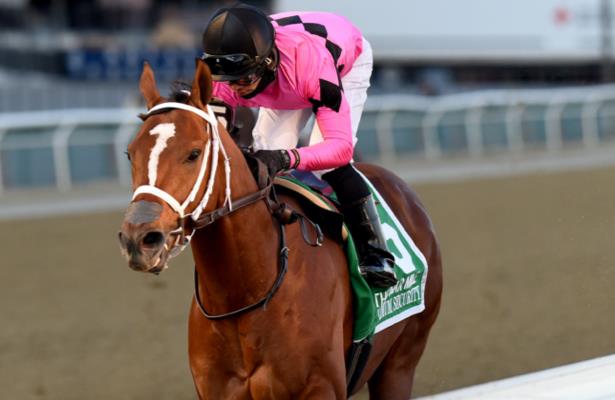 The $20 million Saudi Cup is less than a week away now, and the top American dirt star Maximum Security remains the most probable winner Saturday at King Abdulaziz Racetrack in Riyadh. But the race is not a clear walkover, either, given the other talented names lined up against him.

The field has grown since entries were first announce. While Gift Box defected, international names such as Capezzano, Great Scot, Mijack and North America are new additions.

The Saudi Cup will air on Fox Sports 1 in the United States, and major advanced deposit wagering services are expected to make betting available. Post time is 12:40 p.m. ET.

Here’s an early look at the field of 14 in alphabetical order with projected odds by Horse Racing Nation. Post positions will be finalized later for the 1 1/8-mile Saudi Cup, which runs around one turn.

Benbatl, 10-1 (Dubawi – Saeed bin Suroor – 20: 10-3-1): This international star won Al Maktoum Challenge Round 2 (G2) with ease most recently in his dirt debut. But those Meydan prep races for the Dubai World Cup are typically filled with weaker competition or horses rounding into shape off significant layoffs. Now Benbatl steps up to face some top-quality American dirt stars. While Benbatl is a respected veteran on turf, the waters look too deep here. Toss.

Capezzano, 20-1 (Bernardini – Salem Bin Ghadayer – 16: 6-1-2): The same concern for Benbatl applies to Capezzano. Against weaker horses in the Firebreak Stakes (G3) at Meydan, Capezzano set the pace and rolled home to an easy win. In this spot, though, there are dirt horses in another league than the ones he defeated. Capezzano does not enjoy rating off the pace, which means he will face a stressful first half with quality speedsters in the mix up front. Toss.

Chrysoberyl, 20-1 (Gold Allure – Hidetaka Otanashi – 6: 6-0-0): As an American who does not closely follow Japanese racing, this one is tougher to analyze. But here is one note about Chrysoberyl’s win in the Champions Cup (G1). He received an excellent ground-saving trip and found a big opening when tipped out. Even with his perfect 6-for-6 record, you can count on his competition here to be much stiffer. Toss.

Gronkowski, 20-1 (Lonhro – Salem Bin Ghadayer – 14: 4-3-3): When this horse initially came to Dubai in 2019, he finished fifth in Al Maktoum Challenge Round 3 (G1) before rebounding with a strong second in the Dubai World Cup (G1). This year, he ran a flat-looking third in both The Entisar and Al Maktoum Challenge Round 2 (G2). But, as with before, it’s possible he only needed those races to get back into the flow of a campaign. Supporters will get a good price because of the recent losses. Live longshot.

Great Scot, 50-1 (Requinto – Trainer TBA – 11: 4-1-2): Most American handicappers will not recognize this horse. For what it is worth, he did take the Superior Mile (G3) at Haydock last September when in the care of Tom Dascombe. Saudi interests purchased him to run in this event, and the former trainer mentioned after the transaction that this horse improved with gelding, but would be fortunate to hit the board. He appears overmatched. Toss.

Gold Dream, 20-1 (Gold Allure – Osamu Hirata – 23: 9-7-2): If bettors like Chrysoberyl, they may want to consider the Champions Cup runner-up Gold Dream as well at a higher price. Again, though, stepping up from Japanese competition to this kind of international dirt race with an American presence is not easy. He also did not back up the Champions Cup effort when fourth in the Tokyo Daishoten (G1). Toss.

Magic Wand, 15-1 (Galileo – Aidan O’Brien – 23: 3-9-2): This mare’s ability to travel anywhere in the world and still run at a high level is admirable. In Magic Wand’s most recent start, she ran a good second in the Pegasus World Cup Turf Invitational. Dirt is an unknown for Magic Wand, and her breeding spells grass on both sides. Toss.

Maximum Security, 5/2 (New Year’s Day – Jason Servis – 9: 7-1-0): On paper, there is no reason to go against the top American dirt star. Last year, Maximum Security crossed the wire first in the Kentucky Derby before following up that effort with a Haskell (G1) victory in the summer. Back around one turn in the Cigar Mile (G1), he dominated older horses in December to cap off an impressive campaign. He prefers to set the pace, but sitting off other horses is not a problem and may be necessary here. The pick.

McKinzie, 7/2 (Street Sense – Bob Baffert – 14: 7-6-0): With 13 first or second-place finishes in 14 starts, it is hard to knock McKinzie’s consistency. In his most recent start, he ran a good second to Vino Rosso in the Breeders’ Cup Classic. The 1 1/4-mile distance proved a little too far, and now he cuts back to his favored nine furlongs. With Baffert in his corner, he also has an experienced trainer who knows how to ship to the Middle East to win. Win contender.

Midnight Bisou, 8-1 (Midnight Lute – Steven Asmussen – 19: 12-4-3): Knocking a mare who went 7-for-8 last year, all in graded stakes, is difficult. She ran a good second in the Breeders’ Cup Distaff after a questionable ride to end her campaign. But in Midnight Bisou’s 2020 debut, she tackles males for the first time, including a sharp horse in Maximum Security, McKinzie and an improving Mucho Gusto, all while facing unfamiliar territory. She runs consistently nonetheless and can hit the board. Use underneath.

Mijack, 50-1 (Elzaam – Sami Alharabi – ?:?-?-?): This local contender won The Custodian of the Two Holy Mosques Cup (G1) earlier this month for horses imported to Saudi Arabia to secure his spot in the field. Race officials selected him over the winner of the other division on the same card for strictly local horses. Earlier in his career, he struggled in Europe, never amounting to more than a handicap horse. The presence of international stars will prove too much here. Toss.

Mucho Gusto, 10-1 (Mucho Macho Man – Bob Baffert – 11: 6-2-2): With the reduced purse, the Pegasus World Cup (G1) lacked the same punch as in previous years when City of Light, Gun Runner and Arrogate won. Mucho Gusto was hard-ridden in the stretch to beat Mr Freeze, and it will require more to beat his stablemate McKinzie, let alone Maximum Security, if those two stars transfer their form to Saudi Arabia. As with McKinzie, the big positive is that Baffert knows how to win in the Middle East. Plus, Mucho Gusto has room to improve as a 4-year-old. Win contender.

North America, 30-1 (Dubawi – Satish Seemar – 19: 7-3-3): Similar to Benbatl and Capezzano, this speedy 8-year-old gelding looks like the kind of horse who wins in the Middle East when there are few international shippers and the good horses present are coming off layoffs. In the Saudi Cup, every runner is likely to by at 100% for the world’s largest purse. His pace-setting style will give him some problems, too, with Maximum Security and Capezzano present. Toss.

Tacitus, 8-1 (Tapit – Bill Mott – 9: 3-3-2): After winning the Tampa Bay Derby (G2) and Wood Memorial (G2) last spring, this once-promising colt developed second-itis with runner-up finishes in the Belmont Stakes, Jim Dandy Stakes (G2) and Travers Stakes (G1). He then finished a flat third in the Jockey Club Gold Cup (G1) to go along with his third in the Kentucky Derby, resulting in a layoff of five months entering this spot. Unless he proves otherwise, expect the same board-hitting effort at best. Use underneath.

Conclusion: Maximum Security looks like the best horse in this field. However, there are a few factors working against him, including a change in environment, different medication rules and two speedballs in Capezzano and North America destined to hamper him.

As the best dirt horse, however, he should be expected to overcome those factors.

Those searching for value may take a shot on Gronkowski. With two starts this year in tow, fitness is not an excuse anymore. He figures to get a good trip stalking the leaders — he can run closer to the pace compared to his brief U.S. campaign — and can take advantage if the three speeds fold.