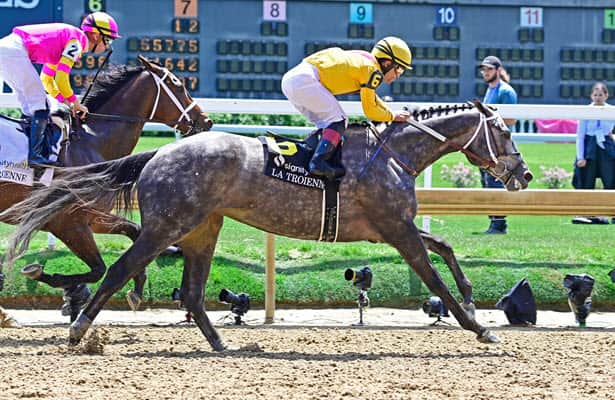 The Arlington Stakes, which will be run for the first time at Churchill Downs, will go as Race 8 of 11. Post time is 4:22 p.m. EDT. The first race for Stephen Foster preview day will go at 12:45 p.m. EDT.

Now trained by Brian Lynch, Gray’s Fable previously competed in the care of Roger Attfield primarily in Florida and Canada. The 7-year-old son of Gio Ponti narrowly held off Hidden Stash in the Opening Verse. As a 6-year-old, Gray’s Fable won the $100,000 Appleton (G3) at Gulfstream Park. Julien Leparoux will ride from post No. 6.

Another top horse that entered the Arlington Stakes is Amerman Racing’s Admission Office, who is also campaigned by Lynch. The 7-year-old gelding by Point of Entry last competed 15 months ago at Gulfstream Park but was a Grade 3 winner as a 5-year-old in the Louisville Stakes at Churchill Downs. The four-time winner will be ridden by John Velazquez from the rail.

Trained by Ian Wilkes, Walkathon broke her maiden by two lengths in late April at Keeneland in her first turf try. The daughter of Twirling Candy returned May 14 at Churchill where she bested 10 rivals by 1 1/4 lengths in a first-level allowance event. She’s poised to return in two weeks for Saturday’s Regret and will break from the rail with Julien Leparoux in the saddle.

Bango is back to defend in Aristides

One of the most competitive races on Saturday’s 11-race card could be the $200,000 Aristides which features defending champion Bango, graded stakes winner Bob’s Edge and recent St. Matthews Stakes hero Top Gunner.

Trained by Greg Foley, Bango won last year’s Aristides by a half-length over Long Range Toddy and Sir Alfred James. He’s set to face Long Range Toddy once again in this year’s event. Most recently, the 5-year-old son of Congrats finished fourth in the $160,000 St. Matthews Overnight Stakes which was his first start in nearly six months. Bango has recorded six of his eight wins beneath the historic Twin Spires. Leading rider Tyler Gaffalione has the call from post 1.

Michael, Patricia and Taylor Freeny and Jennifer Grayson’s Bob’s Edge is another top contender in the Aristides after his victory in the March 19, $200,000 Whitmore Stakes (G3) at Oaklawn. Trained by Larry Jones and ridden from post 5 with Adam Beschizza, the fleet-footed Bob’s Edge cruised to a 2 3/4-length win to begin his 4-year-old season in the $150,000 King Cotton. He entered the Aristides following a disappointing fourth-place effort behind top sprinter Jackie’s Warrior in the $500,000 Count Fleet Handicap (G3).

4 G Racing’s St. Matthews Stakes winner Top Gunner will attempt to notch his third consecutive win for trainer John Ortiz. The 5-year-old son of Into Mischief has only missed the board in three starts and has amassed a record of 14-5-3-3 with $344,493 in purse earnings. Ortiz claimed Top Gunner for $30,000 from trainer John Sadler last March at Oaklawn. Rey Gutierrez will have the return call and drew post 6.

Americanrevolution meets Scalding in the Blame

Americanrevolution, trained by Todd Pletcher, was originally probable for the $200,000 Commentator at Belmont but the race did not fill. The chestnut son of Constitution finished a half-length better than Following Sea in the Dec. 4 Cigar at Aqueduct. Previously, New York-bred Americanrevolution demolished state-bred competition in the $300,000 Empire Classic by 11 3/4 lengths. Americanrevolution will be ridden by Florent Geroux from post No. 8

Scalding, trained by Shug McGaughey III, will ride a four-race win streak into the Blame after winning the Ben Ali by 1 1/4 lengths over Dynamic One and Proxy. The 4-year-old colt by Nyquist broke his maiden on Jan. 5 and has been nothing short of brilliant since. McGaughey sent Scalding to Tampa in February where he dusted a first-level allowance field by 5 1/4 lengths as the 3-5 favorite and recorded his first stakes victory by a neck over top older horse Cody’s Wish in the $100,000 Challenger Stakes. Veteran rider Javier Castellano, who has ridden Scalding in all of his previous six starts, will have the call from post No. 6.

The classy 4-year-old filly Pauline’s Pearl held off 2021 Longines Kentucky Oaks (G1) winner Shedaresthedevil by a half-length in the La Troienne. The five-time winner, campaigned by Hall of Famer Steve Asmussen, started her campaign this year with a 3 3/4-length win in the $400,000 Houston Ladies Classic (G3) and was narrowly defeated by Ce Ce in the $350,000 Azeri (G2). Pauline’s Pearl has been ridden by Joel Rosario for all three starts in 2022 but will be ridden Saturday by Luis Saez from post No. 5.

Trained by Hall of Famer Todd Pletcher, Grand Sonata recorded his first graded stakes score in the Feb. 5 Kitten’s Joy at Gulfstream Park. The son of Medaglia d’Oro finished a game second behind Sy Dog in last month’s $400,000 Transylvania Stakes (G3) at Keeneland. Grand Sonata will be ridden again by Tyler Gaffalione and will break from post No. 2.