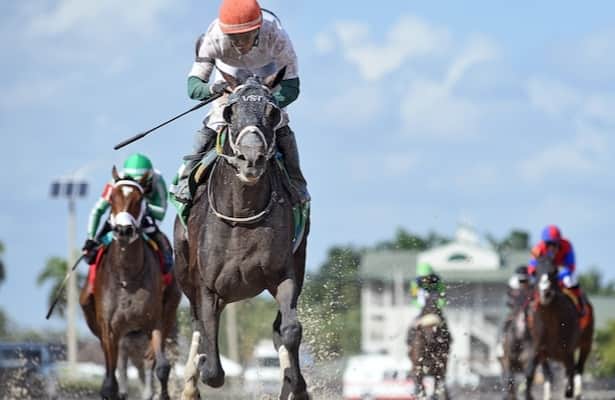 Saturday’s Grade 3, $150,000 Harlan’s Holiday at Gulfstream Park isn’t the richest or most prestigious of the eight graded stakes to be run on the last day of 2022, but it grabs the marquee spot on Horse Racing Nation's stakes roundup by virtue of its possible impact on next month’s Grade 1, $3 million Pegasus World Cup Invitational.

O’Connor, trained by Saffie Joseph Jr. and ridden by Edgard Zayas, is the 8-5 morning-line favorite in the field of eight and will break from the rail for his second U.S. start. The 5-year-old Chilean-bred has a record of 19: 10-5-2, all but one of them in his South American homeland.

In his first U.S. start Oct. 16, the well-backed O’Connor crushed six rivals in a $62,500 optional-claiming race at Saturday’s distance at Gulfstream under Zayas, making an eye-catching rally from fifth to first while racing wide around the far turn en route to a six-length score.

All but one of O’Connor’s opponents are 3-year-olds, including some who competed in this year’s Triple Crown races.

Skippylongstocking (4-1), third in the Belmont Stakes after running fifth in the Preakness, returns from a three-month-plus layoff and draws likely Eclipse Award-winning jockey Irad Ortiz Jr. to ride. The son of Exaggerator threw in a clunker in his last race, the Pennsylvania Derby (G1) on Sept. 24, but has been working steadily for his return and has collected two of this three victories at Gulfstream Park.

Simplification (5-1), winner of the Fountain of Youth (G2) at Gulfstream in March before finishing fourth and sixth in the Kentucky Derby and Preakness, respectively, stretches out after finishing a troubled seventh in the Breeders’ Cup Dirt Mile for trainer Antonio Sano and is a three-time winner over the Gulfstream dirt track. Junior Alvarado will ride the colt for the first time.

Another Kentucky Derby runner, 19th-place finisher Pioneer of Medina (6-1), enters the Harlan’s Holiday on the upswing for trainer Todd Pletcher after gutting out a win vs. $125,000 optional-claiming foes at Churchill Downs. Luis Saez, who piloted the son of Pioneerof the Nile in that race, is back aboard for the Harlan’s Holiday.

The full field and post position order for the 2022 Harlan’s Holiday (trainer and jockey in parentheses) with morning-line odds:

Click here for free past performances for the Harlan's Holiday from Brisnet.com.

The pace in the Harlan’s Holiday could play a role in the outcome as there are no “need the lead” runners in the field. The TimeformUS pace projection for the race suggests that Simplification, who has been prominent in most of his route races, will be in front after the short run into the first turn, but Pioneer of Medina to his inside has also shown speed in his early races, and O’Connor is still largely an unknown quantity after just one start in the U.S.

Here is a look at some other significant stakes, including a trio of graded races races at Santa Anita, on Saturday across the U.S. Post times are EST.

Frank's Rockette didn't turn in one of her better efforts in the Breeders' Cup Filly & Mare Sprint, finishing 11th of 12, but the Bill Mott-trained 5-year-old is heavily favored (4-5) to make amends in this softer spot. Luis Saez retains the mount. Her primary challengers in the six-horse field, according to the morning line, are Coppelia (9-2) and Joyful Cadence (5-1), winner and runner-up, respectively, of the $300,000 Dream Supreme Stakes on Nov. 13 at Churchill Downs.

Though not a graded stakes, the Renaissance will draw some attention due to the presence of three betting interests in the Kentucky Derby futures pools offered by Las Vegas casinos. The 6-5 morning-line favorite in the compact field of six, Two Eagles River, is not one of the Derby futures interests. But three of the horses he'll try to beat on Saturday are listed in the pools offered by Caesars and Circa in Nevada. That includes close second choice Count de Monet (200-1 at Circa), who is 7-5 in the Renaissance. The Tom Swearingen-trained son of Speightster is a perfect three-for-three so far, including a win in the $150,000 Advent black-type stakes in his last start. He'll be joined in the race by fellow Las Vegas futures interests Bourbon Bash (175-1 at Caesars, 225-1 at Circa), who is 12-1 on the Renaissance morning line, and Frosted Departure (200-1 at Caesars, 225-1 at Circa), and 6-1 in the Renaissance.

Whatmakessammyrun is the narrow 7-2 morning-line choice for trainer Mark Glatt in a field of 11. Joe Bravo, who was aboard for the 4-year-old's victory in his only previous race on the hillside course, the Eddie Logan (G2) on Oct. 1, is again in the irons. Grade 1-winning router Smooth Like Strait (4-1) is the second choice as he tries the downhill course for the first time off of disappointing efforts in the Breeders' Cup Mile at Keeneland and the Seabiscuit Handicap (G2) at Del Mar in his last two starts.

Scotish Star, the 5-2 morning-line favorite, returns from a freshening for trainer Todd Pletcher following a head loss in a non-winners of three allowance race on Oct. 21 at Keeneland. Saez will ride the Argentina-bred mare for the second straight time and break from the rail. She'll need to conquer Bay Storm (3-1), beaten only a head in her last start in the Ladies Sprint Stakes (G3) at Kentucky Downs on Sept. 10 for trainer Jonathan Thomas, and eight other rivals if she is to prevail.

Sibelius, trained by Jeremiah O'Dwyer and ridden by Junior Alvarado, is the 3-1 chalk in a competitive 12-horse field. The 4-year-old son of Not This Time comes off a good second in the $299,000 Bet On Sunshine Stakes on Nov. 13 at Churchill Downs in his last start. Graded-stakes winners Pappacap (4-1) and Prevalence (9-2) and sharp last-out allowance winner Seal Beach (8-1) loom as serious threats to the chalk.

Two-time graded stakes winner Queen's Goddess is the 5-2 choice in a competitive field of 11 distaffers. The 4-year-old may be vulnerable, as she is returning from a 7 1/2-month layoff for trainer Michael McCarthy and her two most recent victories have come at the longer 1 1/4-mile distance. England's Rose (7-2), runner-up in her last two against graded stakes competition for trainer John Shirreffs, Avenue de France and Quattroelle, both 6-1, are the most logical potential upsetters.

Colonel Liam is the 8-5 morning line favorite in a 12-horse field with one also eligible as he prepares for an expected defense of his title in the $1 million Pegasus World Cup Turf Invitational (G1) on Jan. 28 at Gulfstream. The 5-year-old son of Liam's Map will be making his first start in more than nine months for Pletcher after a ninth-place finish in the Dubai Turf Cup (G1) in March. Jockey Irad Ortiz Jr. has the call. City Man (9-2) and King Cause (5-1), both of who enter the race off stakes victories in October, are both well positioned to spoil the party if the favorite falters.

Samurai Charm, the 5-2 morning-line favorite, returns to graded stakes after back-to-back wins in lesser stakes for trainer Peter Miller. Flavien Prat has the mount on the 5-year-old, who is two-for-three sprinting but 0-for-three at Santa Anita. Improving 3-year-olds Anacapa (4-1) and Lady T (7-2), appear to be her main rivals, although 4-year-old Violent Runner also could have a say in the outcome.
Simplification Pioneer of Medina O'Connor Skippylongstocking Harlan's Holiday Harlan's Holiday (2022)