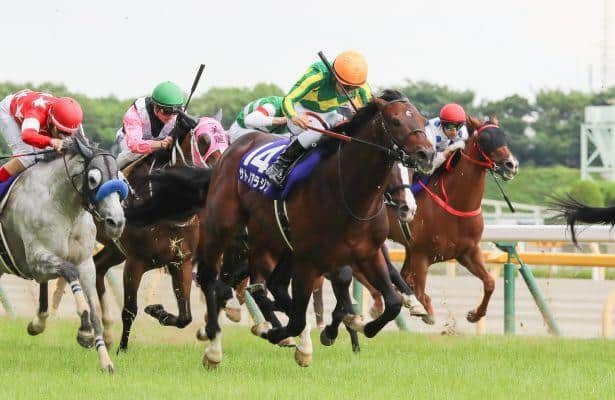 Beauty Only ran home sixth, a length and a half behind the Yasutoshi Ikee-trained victor, while Contentment plugged on for 10th of 18, five lengths in arrears.

“I think the occasion had him a little bit worried,” was jockey Zac Purton’s take on Beauty Only as nerves and the unfamiliarity of racing left-handed were cited as factors in the bay’s undoing.

As for Contentment, last month’s G1 Champions Mile winner, trainer John Size said: “It looks like he ran a normal race but the horses are just too strong for him at Fuchu.”

Satono Aladdin had been no match for Beauty Only when seventh to that Tony Cruz-trained rival in December’s G1 LONGINES Hong Kong Mile at Sha Tin – his second Hong Kong effort after finishing 11th in the 2015 LONGINES Hong Kong Cup (2000m) – but with home turf on his side this time the talented bay flew to a first career G1 score.

When the gates opened to the roar of 57,000 racegoers, both Hong Kong contenders broke smartly and secured comfortable berths. Up front, last year’s trailblazing winner Logotype attempted to repeat the same tactics. Contentment parked just behind the pace under Joao Moreira while Purton positioned Beauty Only at the back of the mid-ranked bunch.

Logotype kicked on at the top of the stretch and the field fanned out to challenge. Beauty Only’s pink-hooded head was conspicuous, wide on the track. The scene was set for a trademark sprint.

“I thought I was going to be the winner,” Purton said.

But neither Beauty Only nor Contentment – bumped mid-stretch but already outpaced and plugging – could muster a challenging effort. Instead, it was Yuga Kawada that flew home atop the winner, quickening from back in the field to overhaul second-placed Logotype and hold off the close attention of fellow fast-finisher Red Falx and Mirco Demuro by a neck.

“Beauty Only didn’t kick home strongly, he ran a bit flat in the straight,” Cruz said in the immediate aftermath. “He was leaning a bit to the left and I could see he was on his near-fore lead in the stretch but he didn’t change gear. It was his first time left-handed so I think the experience will have been good for him.

“Normally in Hong Kong, going right-handed, he changes gear on his near-fore kick and then he has more power. He wasn’t his usual, he just didn’t accelerate. Maybe it was the left-handed track, maybe it was because it’s the end of the season.”

Purton confirmed the view that the six-year-old had raced awkwardly counter-clockwise and opined that the long pre-race parade and milling around at the start probably got to the Holy Roman Emperor gelding who had foaming sweat on his neck and between his back legs by the time the field broke.

“He seemed a little bit nervous going to the gates, he was jig-jogging a lot and sweating up a lot – behind the gates he was quite agitated,” Purton said afterwards.

“Saying that, he jumped out well, he had a nice spot and travelled good. He just had a tendency of wanting to hang in a little bit – he was a little bit lost first time going left-handed. I thought it was a solid effort and I think the experience will benefit him for next season if he was to come back.”

Beauty Only was squeezed up late in the run but Purton was not using that as an excuse. “I was a beaten horse at the time and my horse was as much to blame as the horse on the inside shifting out a little bit, so it didn’t cost me any ground,” he said.

Contentment, too, was impeded in the home run but Moreira’s mount had already shot his bolt by that stage.

“The horse was trying his best; I got a clear run in the straight; he was just not good enough as those other horses went past him. Some really good horses beat us and I’m not very disappointed.”

Size echoed the Brazilian’s appraisal. “It seems the first half of the race everything was perfect,” he said. “When he straightened up he got pressure from the outside and then a little bit from the inside and had some interruption but he (Joao) thought that he was wasn’t strong enough anyway. But he probably should have finished maybe a length closer.”

Moreira ended the day with two wins thanks to a double earlier on the card. His first score, atop Data Value, was the Hong Kong champion jockey’s first win at Tokyo Racecourse and he followed up in the next aboard the errant Satono Titan. All of the rider’s previous wins in Japan had been achieved at Sapporo.