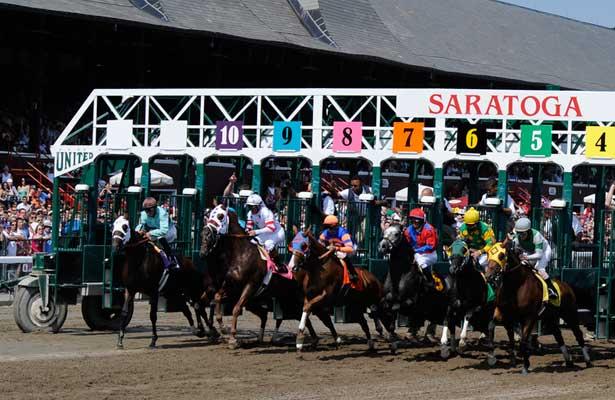 Trainer Todd Pletcher, who last year won an astounding 23 juvenile races during the 40-day meet, will be represented in the six-furlong Schuylerville by two impressive maiden winners in Yes Liz and Elena Strikes, with the Stonestreet entry listed at 5-2 on the morning line.

Yes Liz, a dark bay daughter of Yes It’s True, zipped five furlongs in 57.99 on July 3 as the 1-2 favorite at Belmont Park to win her first start by an eye-catching 3 ¾ lengths.

“She’s pretty straightforward,” said Pletcher of Yes Liz, who will be ridden from post position 6 by Hall of Fame jockey John Velazquez. “She’s very fast. She’s a precocious kind of filly. We expected that type of performance from her. She has good gate speed. She came out of that race really well. That’s why we thought about running her back.”

Elena Strikes, a homebred daughter of Smart Strike, was also the odds-on favorite in her debut on June 22 at Monmouth Park, where she came from off the pace to register a 2 ¾-length victory.

“I think she’ll appreciate the added distance where she can break and not have to be rushed,” said Pletcher, who will be seeking his fifth career victory in the Schuylerville, having won in 2011 with Georgie’s Angel, 2006 with Cotton Blossom, 2003 with Ashado and 2002 with Freedom’s Daughter. “She’s a filly who has shown a lot of quality. She has been training really well up here and she has a good mind. She has been doing well since that maiden race.”

Pletcher, whose domination with his 2-year-olds last year was a key factor in his third straight H. Allen Jerkens training title, did not think a repeat of 2012 was forthcoming but was hopeful for continued success.

“So far, the 2-year-olds are running well,” said the trainer, whose 2012 juveniles included stakes winners Shanghai Bobby, Kauai Katie, Dreaming of Julia, Overanalyze, Violence and 2013 Belmont Stakes winner Palace Malice. “As usual, we come in at the end of April or the beginning of May and look to bring a lot of 2-year-olds. Historically, it has always been a place to get horses ready. They seem to be doing well here. We’re hopeful, but we also know how hard it is to win races here. We had an unbelievable meet with 2-year-olds last year. I think it’s next to impossible to repeat the kind of numbers we had last year. We have to see and hope for the best. Hopefully, we will have some success.”

Favored at 7-5 on the morning line is Bahnah, a six-length winner of her maiden race on June 6 at Churchill Downs, where she covered 4 ½ furlongs in 51.17. With Corey Lanerie aboard, the Elusive Quality filly will leave from post position 5.

Among those challenging Bahnah and the Stonestreet duo will be the Tom Albertrani-trained True Blue Nation, also an impressive maiden winner at Belmont Park.

Owned by St. Elias Stable and West Point Thoroughbreds, True Blue Nation was 17-1 as a front-running, 5 ½-length winner in her debut on June 21, covering the five furlongs in 58 1/5.

“She was very impressive first time out,” said Albertrani. “Normally, I don’t really crank on the 2-year-olds to come out running first time out, but if they do, all the better. I would always expect a better performance second time around, so we were very pleased with that effort first time out.”

With Jose Lezcano in the irons, True Blue Nation drew post position 7 and was listed at 12-1 on the morning line.

Trainer Steve Asmussen, who won the 2009 Schuylerville with Hot Dixie Chick, returns with Darren Pollitt’s Brazen Persuasion, a second-time out winner on June 29 at Churchill Downs. The Indian Charlie filly, 3-1 on the morning line, drew post position 4 and will be ridden by Rosie Napravnik.

Completing the field for the Schuylerville, from the rail out, are Jonesin for Jerry and Silver Valley.

Souper Speedy, who in his second start off a layoff was declared the winner of the off-the-turf Jaipur after stablemate Big Screen was disqualified, is the 5-2 favorite on the morning line to earn a second straight stakes win in the James Marvin. He has been no worse than third in six of seven lifetime starts and Albertrani is confident the 4-year-old Indian Charlie colt will continue his upward trajectory.

“He’s has two good races in a row since he’s been away,” said Albertrani of Souper Speedy, who was off from November of 2012 until April. “The horse has come back very well, so this race looks like an ideal spot.”

Jaguar Paw, a winner of three of four starts this year for trainer Chad Brown, shortens up in the James Marvin as he seeks his first graded stakes score. Last time out, the 6-year-old son of Giant’s Causeway was a 5 ¾-length winner of the 1 1/8-mile Three Coins Up overnight stakes at Belmont Park.

“I think the cutback in distance is worth a try,” said Brown, who will give a leg up to Javier Castellano. The pair will leave from post position 5 and was listed at 6-1 on the morning line.

Sage Valley, whose four-race win streak was snapped when he finished fifth in the Grade 2 RTN True North Handicap on June 8, will be going for his second graded stakes win. Trained by Rudy Rodriguez for Michael Dubb, Sage Valley earned his first graded with a 2 1/4-length victory in the Grade 3 Maryland Sprint Handicap on Preakness Day.

At 5-1 on the morning line, Sage Valley drew post position 4 and will carry 123 pounds, including Cornelio Velasquez.

Rounding out the field, from the inside, are Politicallycorrect, Hello Lover, Willyconker, Right to Vote, Laurie’s Rocket, and Strapping Groom.