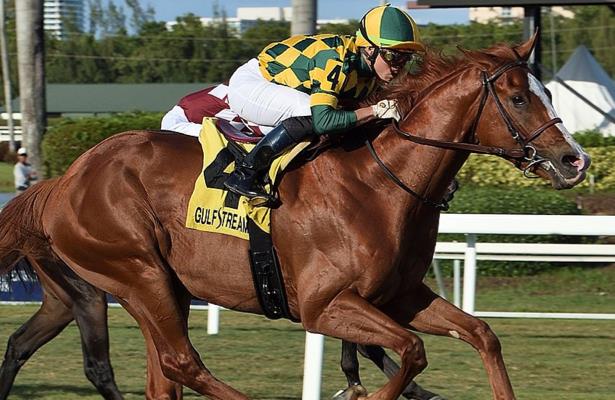 Otter Bend Stables' Gufo won for the fourth consecutive time and improved to 3-for-3 in his 3-year-old campaign after winning the Grade 3 Kent on Saturday at Delaware Park.

Gufo ran third in his debut in November at Aqueduct Racetrack and has gone undefeated since, including a 1 1/2-length score in the 1 1/16-mile English Channel on May 2 at Gulfstream Park before a half-length score in his graded stakes debut going 1 1/8 miles on the Delaware Park grass.

Gufo covered nine furlongs on firm turf in a track record 1:46.94, lowering the previous course record of 1:47.19 set by American Patriot in the 2016 Kent.

Trainer Christophe Clement said the Kent effort, which resulted in a 90 Beyer Speed Figure, could set up a potential start in the $500,000 Saratoga Derby on August 15 at Saratoga Race Course.

The second running of the Saratoga Derby is part of NYRA's Turf Triple series for 3-year-olds and is contested at 1 3/16 miles.

"He's a nice horse and getting better," Clement said. "He'll be trained for the Saratoga Derby. We'll try to train him for that and go from there."

Before heading up to the Spa, Clement saw a plethora of turf workers breeze Sunday morning at Belmont Park.

"He looked good and worked well," Clement said. "He was very willing. The main thing is to go one step at a time. It was good to get a race. He seems to be sound and willing, so if everything goes well in the next week or two, we'll be looking for another race. There's a race in mid-July [Wolf Hill, July 18] at Monmouth."

*Rating is based on HRN fan votes, which rank the Top Active Horses in training.
Gufo