Saratoga: With The Moonlight shines for Godolphin in Oaks 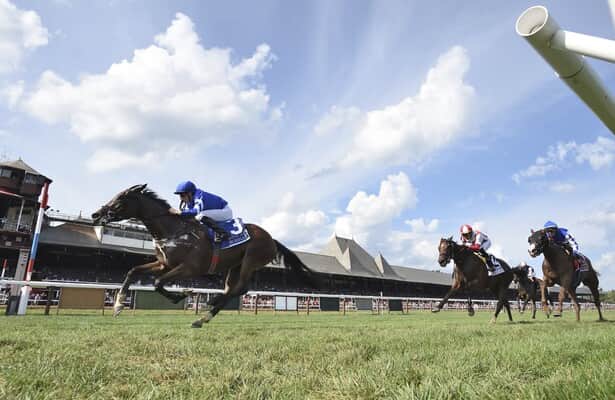 Trainer Charlie Appleby opted to keep both Nations Pride and With The Moonlight in the Empire State after they each finished second in the opening legs of the Turf Triple series in July at Belmont Park.

That decision paid off when both returned to win their next starts. Nations Pride captured the Saratoga Derby Invitational (G1) on Saturday, and With The Moonlight took command in deep stretch to post a 1 3/4-length score in Sunday’s Grade 3, $700,000 Saratoga Oaks Invitational.

“I thoroughly enjoyed it. I have to say, NYRA and everybody at Saratoga have been very kind to us and very hospitable,” Appleby said of his prosperous first in-person visit to the Spa. “They looked after myself and my team very well. Obviously, it’s great to have the winners, but it’s my first time here, and I thoroughly enjoyed it. It’s an amazing place, and I can see why there’s been a lot of history and a lot of fun had here.”

?? With The Moonlight dances to the wire in the Saratoga Oaks (G3) with William Buick for Charles Appleby! pic.twitter.com/bjHZJ9RpQE

Ridden to victory by William Buick, who also completed the sweep after guiding Nations Pride to victory, With The Moonlight improved from a 1 3/4-length defeat to McKulick in the Belmont Oaks Invitational (G1) to get the better of her familiar foe in the 1 3/16-mile event for sophomore fillies.

A homebred daughter of Frankel for Godolphin, With The Moonlight emerged a touch slow from post 3 and settled in behind pacesetter Contemporary Art as the Irad Ortiz Jr.-piloted McKulick settled along the rail after brushing with New Year’s Eve from the inside post.

Contemporary Art led the compact field of five through an opening quarter-mile in 24.91 seconds over the firm Mellon turf course while maintaining a comfortable one-length advantage over With The Moonlight, who tossed her head a bit in the first turn under patient handling from Buick.

Positions remained unchanged through a half-mile in 50.14 seconds before New Year’s Eve made an early move along the rail as McKulick went to the outside of rivals to make her run with rousing from Ortiz.

Contemporary Art remained in command at the top of the stretch, but With The Moonlight charged down the lane to her outside with purpose, coming to even terms with the stubborn pacesetter while McKulick angled in between foes and chased to the inside of With The Moonlight.

With The Moonlight edged clear in deep stretch to secure the victory in a final time of 1:54.60.

McKulick collared stablemate Contemporary Art just in time to hold off the late bid of New Year’s Eve and land place by a neck. Contemporary Art rounded out the superfecta with Oakhurst, who trailed throughout, finishing fifth. Walkathon was scratched.

Buick had replaced veteran rider Frankie Dettori after he rode her from just off the pace to her second-place finish in the 10-furlong Belmont Oaks. Appleby said distance contributed more to her defeat than her ride.

“They went hard at Belmont, and to be fair to Frankie, it was the first time he’d sat on her and I said, ‘Look, ride her like she’ll get the trip.’ On the evidence of today and evidence of that day, coming back a half a furlong suited her,” Appleby said. “She’s got plenty of boot. You could almost bring her back to a mile. The more races she’s got, the more experience she’s got. She’s learning how to do it. It was a good performance today.”

The scratch of Walkathon, a prominent winner of her last three outings, altered the dynamics of the race as there appeared to be no clear speed on paper, prompting Contemporary Art, the daughter of Dubawi who was forwardly placed last out in her maiden score, to be the one to establish command.

Appleby said he would have been content to let With The Moonlight dictate terms but was happy with the way things turned out.

“When there were three of Chad’s horses in there, and to be fair to the Dubawi filly, she led when she broke her maiden. We were going to try and jump to the lead and see if anyone wanted to take it off us, but she was a half a stride slow from there, and the race developed the way it did,” Appleby said.

It was the first graded win for With The Moonlight, who flashed her talents early on in England with a maiden win at second asking last August at Chelmsford. Three starts later, she notched her first stakes win in the Pretty Polly this May at Newmarket. She followed with an off-the-board finish in the Epsom Oaks (G1) in June before her runner-up finish in the Belmont Oaks.

Appleby said the Jockey Club Oaks (G3) going 1 3/8 miles on Sept. 17 at Aqueduct will be too far for With The Moonlight and that he will look for another spot for her.

“The question mark was whether the Oaks would be something to look at, but that’s clearly not an option for her. William said that was far enough for her today,” Appleby said.

Buick said he knew his filly would run a big race.

“She felt really good today,” he said. “I think the team had been really happy with the way she was training, so they were quietly confident going into it.

“She travels very well, which is key really. Our horses coming from Europe to here, they always improve with one run on these tracks. It’s a lot different for them. Yesterday and the filly today, they were always going to improve off that first run and I think they showed that.”

Scoring the middle legs of the Turf Triple was special for Buick as well, who rode at Saratoga for this first time in Saturday’s Saratoga Derby.

“It’s nice to come over here with two nice horses, two nice rides and two winners,” Buick said. “It’s a real privilege to be here to be honest. It really feels special.”

Ortiz had no excuses for McKulick, who benefitted from a swifter tempo in the 10-horse Belmont Oaks.

“I got a perfect trip. I can't complain. The turf is a little firmer, harder today (compared with Saturday),” Ortiz said. “Last time the pace was a lot different for my filly, which she appreciated, because she loves the distance. The pace today was a little too slow for her, but she was still coming and ran big. She got beat by a nice filly, and the pace was slow. He got the jump on me, and my filly kept trying, so I'm happy.”