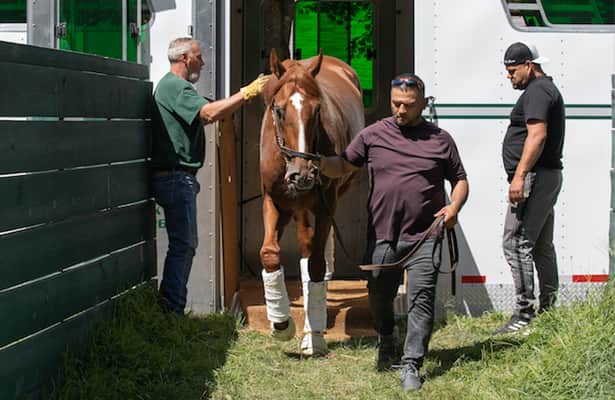 When the Grade 1, $1.25 million Travers is run Aug. 27 at Saratoga, many of the finest 3-year-old Thoroughbreds in training will strut their stuff in the midsummer derby.

You know their names. Roll call:

The tough Epicenter, who never runs a bad race. Charge It, an eye-popping 23-length winner in the Dwyer (G3) at Belmont. Blue Grass (G1) winner Zandon – he’ll be here too, as will his up-and-coming stablemate Atorius, who looked good winning the listed Curlin Stakes at the Spa earlier in the meet. And don’t forget Cyberknife. He won the Haskell Stakes (G1) at Monmouth last month.

And, of course, there is horse racing’s 2022 remake of the classic Cinderella story. Welcome to the party, Rich Strike. We all remember what he did on the first Saturday in May when 147,000 pairs of eyes at Churchill Downs did not believe what they had just seen.

Rich Strike, at 80-1, was the second biggest upset in the long and storied 147-year history of America’s greatest horse race.

Now, as summer begins to lose its stranglehold to fall, let’s run it back.

Rich Strike will be one of the eight or nine horses entered in the race. He certainly won’t be 80-1 this time. Will he?

“He might be,” his trainer, Eric Reed, said with a hearty belly laugh. “He might be more. You never can tell.”

Reed was saying this the other day as he waited on the Saratoga backstretch for Rich Strike to arrive from the trainer’s Mercury Equine Training Center in Lexington, Ky.

Of course, he doesn’t really think the son of Keen Ice, who is owned by Rick Dawson’s RED TR-Racing, is going to be discarded as a hopeless long shot in the Travers.

“It doesn’t matter what his odds are to me,” Reed said. “He has run with these horses, and he has run good.”

The 57-year-old Reed, whose first Grade 1 win was that improbable Derby, came back from orbit when Rich Strike didn’t run at all when he was a non-threatening sixth in the eight-horse Belmont Stakes (G1) in his last start. The colt has only two wins in his nine-race career.

After the Belmont, Reed took the heat from those who said the Belmont proved the Derby was a fluke. Since that race on June 11, Reed has taken all the blame for the lackluster effort. He has given Rich Strike time off. And he has resumed his training, which, by Reed’s account, has been phenomenal.

Oh, he does want to prove to the racing world – heck, the sports world – that Rich Strike is not a one-hit wonder.

“For him, a lot,” Reed said when asked about redemption. “For me, that stuff doesn’t matter. That Derby … all you have to do is watch the aerial and you know what he did. The horses he passed at the end (Epicenter and Zandon) were not on the pace. They were fighting for a win and they had dream trips. I guarantee you both those horses' (trainers) thought it was theirs.

“I know he belongs,” he said, “They can say what they want. It’s not like the other horses had a bad trip and couldn’t get to the wire. He outran them that day. If things are right, he can outrun them. The question is, will he? You listen to the TV and nobody gives a crap about him. You know, he’s just another horse in the race and probably shouldn’t be there. We’ll see.”

Since Rich Strike got to Saratoga – he is staying in the barn of Dale Romans, who trained Keen Ice to a victory in the 2015 Travers over Triple Crown winner American Pharoah – he has gotten a look at the Saratoga dirt. A work is planned for later in the week, Friday or Saturday.

According to Equibase, the last time Reed ran a horse at Saratoga was Sept. 5, 2020, when Complicit ran seventh in the Glens Falls Stakes (G2) on the grass. Rich Strike, the only horse Reed brought to Saratoga this year, will be the 19th starter he has ever had at the Spa.

“There is no place like it,” said Reed, who is based year-round in Kentucky. “It’s the people’s place. It’s nostalgic. It’s gorgeous just standing under a shady tree like this. It’s like seeing the Twin Spires at Churchill. The first time I came here, I was in awe of the place.”

Late in the day on Travers day, Aug. 27, Reed hopes he is in just as much awe of Rich Strike. That would mean his horse, the lovable long shot, had done it again.

“I think it would be as big a miracle as winning the Derby,” he said. “I am not going to say he is going to win, but I really think he is going to run well. He’s a blue-collar horse. This is the Travers. We are pumped. This is going to be an exciting couple weeks for us.”