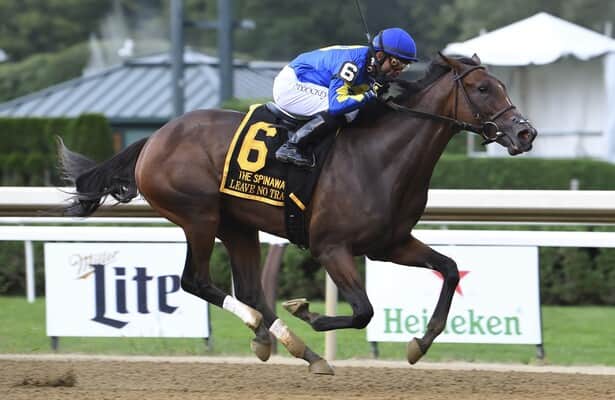 Leave No Trace kept a perfect record intact with a 1 1/2-length victory at odds of 14-1 in Sunday’s 131st renewal of the Grade 1, $300,000 Spinaway, a seven-furlong main track sprint for juvenile fillies at Saratoga.

Owned by WellSpring Stables, trained by Phil Serpe and piloted for the first time by Jose Lezcano, the Outwork bay entered from a stalking score under Irad Ortiz Jr. in a restricted maiden sprint on July 20 at the Spa that garnered a co-field best 77 Beyer Speed Figure, according to Daily Racing Form.

The third-place finisher of that event, U Glow Girl, came back to post a 7 1/4-length maiden score at Saratoga on Aug. 17.

Serpe said the maiden score and sharp five-eighths breeze in 59.66 seconds on Aug. 21 over the Spa main track gave him confidence into the filly’s stakes debut.

2YO LEAVE NO TRACE takes down the Grade 1 Spinaway Stakes with Jose Lezcano aboard! #Saratoga pic.twitter.com/0NrKf6bMLD

“Her first race was impressive. I don’t swear by Beyer numbers and sheet numbers, but I do use them as a tool,” Serpe said. “Her numbers were good, she was training great, she worked 59 and change for fun. You’ve got to go and make hay when the sun shines. Some horses in here had run a couple of times, some horses like her had only run one time. But you got to take a shot. That’s what racing is.”

One of our handicappers had this horse as the top pick

Naughty Gal, last-out winner of the Adirondack (G3) at the Spa, broke alertly under Luis Saez and set splits of 22.84 and 46.66 seconds over the fast main track with Leave No Trace tracking in second position as a slow-starting Kaling rushed up the rail into third to the inside of Wonder Wheel.

Kaling, with Flavien Prat up, cut the corner and squeezed down the rail with a strong burst at the head of the lane as stakes-winner Wonder Wheel, under Tyler Gaffalione, launched her bid to the outside of Leave No Trace.

Wonder Wheel lugged in while attempting to switch leads in the final eighth of a mile as Kaling persevered along the rail, but Leave No Trace, despite drifting out some, found her best stride late to secure the win at a final time of 1:24.03.

Wonder Wheel completed the exacta by 1 1/4 lengths over Kaling with the late-running American Rockette, who broke significantly outward from the outermost post 10, completing the superfecta.

“We kind of thought coming out of the gate she would be laying third or fourth, just let her finish up,” Serpe said. “But she broke real sharp, and what are you going to say? I’m not out there; that’s Lezcano’s job.

“I think we really don’t wind our 2-year-olds up or our first-time starters up, at all. We have them fit and ready to run,” Serpe added. “When she won that day like that, she was impressive, and that shows something in our barn. So she was impressive, and she’s been impressive since before we ever left Belmont. She was working well, easily 47 and change, and you have to be impressed with a horse like that. If you look at her, she’s gorgeous. She went through a growth spurt in the spring. She’s grown six inches in every direction which is what you want a horse to do in August going into September. It was everything you would like.”

It was the first Grade 1 win for Serpe since Birdonthewire captured the 1993 Vosburgh at Belmont Park.

“It’s great. We are really, really happy for the people who own this horse,” Serpe said. “They’re great people, they’re deserving, and it’s all around a great feeling for everyone.”

Lezcano captured a Grade 1 for the third consecutive summer at the Spa, adding to past success with Lexitonian in the 2021 Alfred G. Vanderbilt Handicap and Vexatious in the 2020 Personal Ensign.

“It’s very special to me. I try every year to at least take one. It’s very good and amazing,” Lezcano said. “I think she’s a very nice filly. I never touched her before. She broke so well, and she was right there. I really didn’t have to do too much. I let her (have) things her way, and she did everything. When I asked her, she went on and won the race. I had a lot of horse going to the five-sixteenths.”

Hall of Fame trainer Mark Casse said he was hoping Wonder Wheel, last-out winner of the Debutante in July at Churchill Downs, would find more late in the lane.

“Obviously I would’ve like to have won, but I thought she ran really well. She got hung out pretty wide,” Casse said. “We were hung out, and I could see Flavien flying up the rail, and I thought, ‘Oh, dear God.’

“She didn’t change (leads) until about the sixteenth pole,” Casse added. “I thought maybe when she changed, she’d kick on again, and she did. She ran well.”

Casse said Wonder Wheel will now target the Alcibiades (G1) on Oct. 7 at Keeneland, Serpe indicated he would take him time before finding a next spot for Leave No Trace, who received a $30,000 credit via the “Breeders’ Cup Dirt Dozen” program towards entry fees for the Juvenile Fillies (G1) in November at the Lexington oval.

Wonder Wheel received a $15,000 credit, and third-place Kaling garnered a $7,500 credit via the same program.

“We only wanted to go to today. We had to see what was going on,” Serpe said. “It wasn’t like we were 3-5, but the odds almost don’t matter in races like this, because you just don’t know who these fillies are yet, and some of them are going to get better. Some of these in these races haven’t even broken their maidens yet. So it’s a crap shoot. We’ll see how she is and come up with a plan.”

Leave No Trace, out of the Good Journey mare Tanquerray, was purchased for $40,000 at the Fasig-Tipton Midlantic Eastern fall yearling sale. Bred in Kentucky by Red Cloak Farm, Leave No Trace banked $165,000 in victory while remaining perfect through two starts. She returned $31.60 for a $2 win bet.