Saratoga: Americanrevolution may be scratched from Whitney 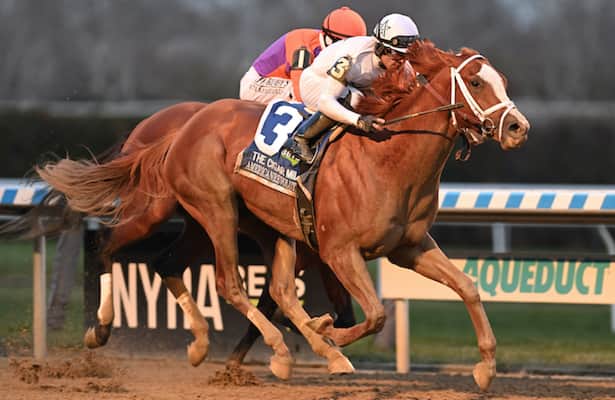 A six-horse Whitney Stakes (G1) field may be reduced to five.

Elliott Walden, speaking on behalf of co-owner WinStar Farm, expressed doubt about whether Americanrevolution will enter the starting gate for the $1 million Whitney on Saturday at Saratoga.

“When you have LeBron James, it’s hard to take the 10th best player in the NBA,” Walden told Horse Racing Nation upon the completion of Wednesday’s draw.

Walden was referring, of course, to Life Is Good, who is rated a slight 6-5 favorite against streaking 2-1  Olympiad for the 1 1/8-mile contest. Life Is Good and Americanrevolution are co-owned by WinStar and CHC Inc.

According to Walden, a decision on Americanrevolution will be made in conjunction with Hall of Fame trainer Todd Pletcher on Friday.

Walden appears to be decidedly undecided about whether Americanrevolution should be scratched.

“Americanrevolution fits with the rest of them. Obviously, he got beaten by two lengths by Olympiad the last time,” Walden noted, referring to a 2 1/4-length setback in the July 2 Stephen Foster (G2) at Churchill Downs. “This is his third race in the cycle. It’s conceivable he could move a step forward, so it’s tempting to run.”

The winner of the Whitney earns a fees-paid berth in the Breeders’ Cup Classic.

The weather forecast provides another element to the Americanrevolution debate. Scattered thunderstorms are predicted for Friday and Saturday, creating the potential for a sloppy track. “He really ran well in the slop at Belmont last fall, so that might play into it as well,” Walden noted.

Americanrevolution relished a sloppy, sealed track last Oct. 30 at Belmont Park when he romped against fellow New York-breds by 11 3/4 lengths in the Empire Classic Handicap.

The serious consideration being given to scratching Americanrevolution would seem to signal that Life Is Good is thriving at the perfect time. The 4-year-old son of Into Mischief dusted speedy Speaker’s Corner by five lengths in the July 2 John A. Nerud at Belmont Park.

“He ran a super race in the Nerud and has trained really well,” Pletcher said.

*Rating is based on HRN fan votes, which rank the Top Active Horses in training.
Americanrevolution Whitney Whitney (2022)