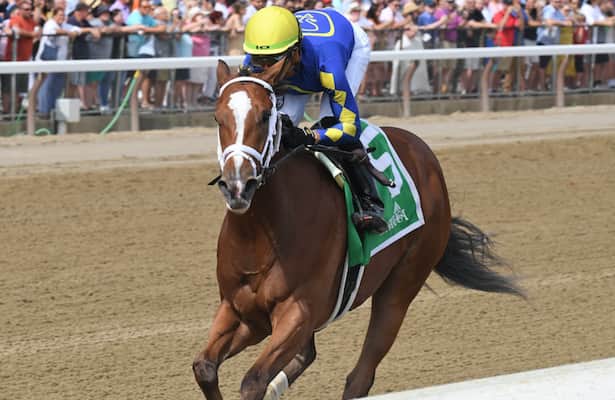 The $300,000 Spinaway Stakes at seven furlongs Sept. 4 at Saratoga will be must-see action. That is when promising Prank is due to step up to Grade 1 company, seeking a fitting encore to a spectacular debut.

The half-sister to Belmont Stakes winner Mo Donegal thrilled onlookers when she tore through 5 1/2 furlongs in 1:03.95 and demolished St. Benedicts Prep, her closest pursuer, by 9 3/4 lengths on July 31 at the upstate New York track.

Trainer Todd Pletcher has had his share of first-time starters emerge as the talk of the town with stunning performances. Add this one to the list.

“It was certainly up there,” Pletcher said. “The filly trained like she was capable of making a good showing. She even exceeded expectations. But at the same time, it wasn’t shocking based on the way she trained.”

Owners StarLadies Racing, LNJ Foxwoods and Gainesway Stable were concerned and then thrilled as the tour de force unfolded. The bay daughter of white-hot sire Into Mischief, with Irad Ortiz Jr. aboard, broke sharply and popped an opening quarter in 21.91 seconds en route to a 45.11 half-mile.

“I thought I was going to lose my mind when I saw the fractions, how fast she was putting them up,” said Laurie Wolf, who leads StarLadies. “I was like, ‘OK, maybe we are a little too keen.’ And she turns around and re-breaks.”

Advisers Frankie Brothers, Jason Litt and Alex Solis saw that kind of potential when they all placed her on their short lists at Keeneland’s September Yearling Sale. She was bred by Ashview Farm and Colts Neck Stable. Pletcher describes her as “all Into Mischief.”

Brothers explained that she has a striking resemblance to her sire, bears his muscular appearance and displayed his quickness in her opening act. “Everybody made the point that she was a racy filly. We all agreed on her and then we took our best shot,” he said.

That meant bringing her home for a cool $500,000 – and Brothers said they were willing to go higher if necessary. She might prove to be a bargain if the Spinaway goes her way and serves as a steppingstone to the Breeders’ Cup Juvenile Fillies at Keeneland.

“It’s a gradual stretch-out in distance. Any time you go from a maiden to a Grade 1, you’ve got to continue to improve,” Pletcher said. “We couldn’t be happier with what we’ve seen so far.”

Wolf emphasized that Prank possesses an excellent demeanor to accompany her physical prowess. “She is just a lovely, talented, kind-minded filly,” she said. “I mean she just seems older for her age.

“She takes everything in stride. It’s a good place to be if we all had her type of mentality and emotional state.”

The enormous question, of course, involves whether Prank, out of the Pulpit mare Callingmissbrown, will develop into more than a sprinter. Brothers sees signs that she will.

“She’s got a nice, fluid stride,” he said. “She doesn’t necessarily have a sprinter’s stride, which is a short, choppy stride.”

Brothers also will not soon forget a five-furlong work in 1:01.66 on July 11 that ranked second of 10 at the distance. “She galloped out really strong,” he said. “Until proven, you just don’t know. From what we’ve seen, I think she has a chance to get the distance.”

StarLadies, established in 2013, is limited to female owners and focuses solely on prospects that are fillies. Prank was part of a five-horse package it purchased with LNJ Foxwoods and Gainesway. Three others already have been, or will be, assigned to Pletcher. They are Shade, by Street Sense; Starfox, by Bolt d’Oro; and an unnamed Munnings filly who remains on Eddie Woods’ farm in Ocala to give her extra time to develop. Divisibility, by Maclean’s Music, joined trainer Brendan Walsh in late July.

Prank is the leader of the band for now. And possibly forever.