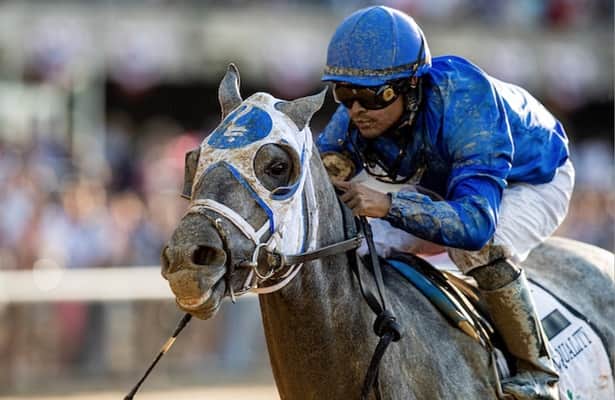 The Grade 2, $600,000 Jim Dandy at Saratoga on Saturday drew a field of six 3-year-olds that has four graded stakes winners, including from the Belmont Stakes, along with two runners from the Kentucky Derby.

The Jim Dandy is named for the horse that upset Triple Crown winner Gallant Fox in the 1930 Travers at odds of 100-1. Jim Dandy raced 141 times in his career, with seven victories.

Here is a full field analysis for the Jim Dandy, with odds provided by the Horse Racing Nation staff.

1. Dr Jack (12-1 – Pioneeerof the Nile – Todd Pletcher / Jose Ortiz – 3: 2-0-1 - $68,640) Dr Jack won the first two starts of his career for Todd Pletcher with a maiden win at Gulfstream Park and then an allowance at Pimlico on Preakness weekend. He stretched out from a sprint to two turns and, in both cases, Dr Jack pressed the early pace and took control of the race before the stretch run. His stakes debut was in the Pegasus at Monmouth Park, where he ran third all the way around the track, finishing behind Mandaloun and Weyburn. He can’t be completely dismissed in this quality field as Pletcher seeks his sixth win in the Jim Dandy. Use underneath.

2. Masqueparade (4-1 – Upstart – Al Stall Jr. / Miguel Mena – 6: 3-0-1 - $422,201) Masqueparade had a breakthrough victory in the Ohio Derby (G3) for trainer Al Stall Jr. After an almost 12-length allowance win, the public crushed the son of Upstart at the betting windows, making him the 2.20-1 favorite at Thistledown. Masqueparade sat a perfect stalking trip, got into contention down the backstretch and then got up to win after a long and determined stretch drive. This field is much stronger than in the Ohio Derby and the bay colt has the look of a "last time was the time" horse; today he may be the second choice in the betting. Exacta finish possible.

3. Weyburn (5-1 – Pioneerof the Nile – Jimmy Jerkens / Irad Ortiz Jr. – 6: 2-2-0 - $307,520) Weyburn’s neck loss in the Pegasus at Monmouth Park was flattered when Mandaloun went on to run so gamely in the Haskell Stakes (G1). Weyburn has two wins in his career; both came at Aqueduct, when he broke his maiden in December and then scored in the Gotham (G3) going a one-turn mile at odds of 46-1. In the Wood Memorial (G2), Weyburn pressed the pace and got out finished to end up fourth. He likes to be part of the pace, and in this field without any confirmed early speed he could be on the lead. There is a bit of an unpredictable feeling about Weyburn, which is often the case with Jimmy Jerkens runners, but on his best day he should be part of the trifecta. Jerkens won the Jim Dandy in 2014 with Wicked Strong. Use underneath.

4. Keepmeinmind (6-1 – Laoban – Robertino Diodoro / Joel Rosario – 9: 1-2-2 - $534,987) This son of Laoban still has only one win to his credit, and much of that has to do with his deep closing style. His sire won the Jim Dandy in 2016. That lone victory was in the Kentucky Jockey Club (G2) as a 2-year-old. In his fifth start of this year, Keepmeinmind rallied from last in the Ohio Derby (G3) to finish third, beaten by only a half-length. His career earnings of more that $500,000 point out the quality fields in which he has run. Except for his first start, Keepmeinmind raced only in graded stakes. Use underneath.

5. Essential Quality (3-5 – Tapit – Brad Cox / Luis Saez – 7: 6-0-0 - $3,215,144) With his Belmont Stakes victory, Essential Quality more than made up for his only career loss in the Kentucky Derby, when he was fourth. His classic victory was impressive because he handled the 1 1/2 miles and he drew off down the stretch to defeat Hot Rod Charlie. The son of Tapit has won races while pressing the pace and rallying from as far back as eighth. His near perfect record and the versatility shown during his races will make Essential Quality hard to beat in the Jim Dandy. Top choice.

6. Risk Taking (15-1 – Medaglia d’Oro – Chad Brown / Manny Franco – 6: 2-0-0 - $200,030) Risk Taking has been off since running eighth in the Preakness, and before that he was seventh in the Wood Memorial (G2). In both of those races, the Chad Brown trainee had trouble leaving the gate and did little running after that. Risk Taking burst onto the Kentucky Derby trail when he broke his maiden at Aqueduct and then won the Withers (G3) by almost four lengths. He has been training at Saratoga and will need to make a form reversal to the way he ran at the Big A – and that might not even be enough to contend in this Jim Dandy field. Toss.

Summary: His near perfect record and his three Grade 1 victories give Essential Quality a significant class advantage over the Jim Dandy field. The versatility that the son of Tapit has shown in his six wins will allow Essential Quality to do whatever is needed to find the winner’s circle again.

Weyburn appears to be the only horse that prefers to be forwardly placed, so Luis Saez will need to be prepared to keep Essential Quality closer to the lead in the Jim Dandy.

Upsets frequently happen in big races at Saratoga, but Essential Quality must be in great shape and ready to race since trainer Brad Cox changed his plans to include the Jim Dandy prior to the Travers.

Most likely to complete the exacta are Masqueparade and Weyburn.