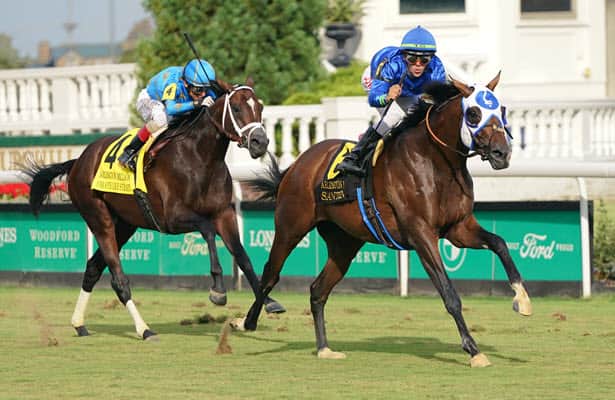 One race is not much of a sample to go on when it comes to betting or racing horses. But one race was all it took Saturday afternoon for trainer Brendan Walsh and jockey Tyler Gaffalione to fashion the winning strategy for Santin in the Grade 1 Arlington Million at Churchill Downs.

“The grass, the way it was playing, they really weren’t coming back to you,” Gaffalione said after Santin (2-1) turned a pace-stalking trip into a 1 3/4-length victory in the race that was transplanted from its four-decade home near Chicago. “It was holding very good. We just didn’t want to let that horse get away.”

That horse was Smooth Like Strait (2-1), who could not shake Santin throughout the 1 1/8-mile trip. He and jockey John Velázquez never led by more than a length at any call. When they spun into the five path out of the turn, Gaffalione and Santin used the six path to slingshot into a lead they would not relinquish.

“Good trip,” Velázquez said about his 5-year-old mount. “Good trip. He’d run his race, and the other one ran better than us. We both had to run on the same ground. Whoever liked it better ran better.”

The ground was a major talking point coming into the day, and it remained so afterward. The $10 million turf course that was planted last October could not absorb the wear and tear of the spring meet. After a fatal breakdown June 10, the turf was shut down for the last three weeks before closing day July 4. It was given provisional blessing when the Million was one of only two races allowed on it Saturday.

“I thought Churchill did a great job preparing for today,” Gaffalione said. “It was a very safe course us. We had no issues out there. We were very thankful to them.”

Another jockey described the course as dry and sandy right after the Million. The toteboard and the race chart called it good. By the end of the day, it had a lot of divots from the two races run on it, even in the 24-foot-wide strip that had been preserved just for the Million.

Rather than complain, team Santin seized on it. More than three hours earlier, Gaffalione rode Santin’s stablemate Family Way to a third-place finish in the Beverly D. (G1), which was won by pace-stalking Dalika. That was all Walsh needed to see. He and Gaffalione went to school on how the turf played in that race.

“It kind of made up our mind,” Walsh said. “We just said we’ll have to be aggressive. Look, nobody came from behind in the (Beverly D.), either. It was basically a carbon copy.”

Santin’s chasing of Smooth Like Strait was made easier by the morning scratch of Megacity, one of two Mike Maker-trained horses who had been entered in the Million. Had he gone to the post, he probably would have given Smooth Like Strait more of a challenge for the early lead. His absence opened the door for Gaffalione to do some shadowing.

“With the scratch of the other speed, we didn’t want Smooth Like Strait to get away too easily,” Gaffalione said. “We decided to keep the pressure on him, and he was there for me.”

Smooth Like Strait established stalkable early fractions of 23.85 and 47.43 seconds before he was pressed into a three-quarter-mile time of 1:10.64. By the time the field of eight was led to the end of the first mile, it was Santin who was clocked at 1:34.51 on the way to his winning time of 1:46.88. On a tighter course, that still was 0.57 seconds slower than the Beverly D.

It was the second win in the last three starts for Santin. He finished first in the Turf Classic (G1) over the same course and distance on the Kentucky Derby undercard before weakening to a sixth-place finish June 11 in the 1 1/4-mile Manhattan (G1) at Belmont Park. All three races came since Walsh added blinkers to the 4-year-old Distorted Humor colt.

“He’s such a laid-back horse, especially for such a lightly raced horse,” Walsh said. “We were putting the bridle on him before we came down, and he was on three legs. He was half asleep.”

But Santin has been wide awake once the gates have flown open at Churchill Downs, where he is 2-for-2. His next stop will be somewhere else with the $1 million Coolmore Turf Mile (G1) at Keeneland on Oct. 8 being a strong possibility.

“It probably would be a race you would think about,” Walsh said. “There’s a big race in November going a mile that we might have to look at as well."

That would be the Breeders’ Cup Mile, also at Keeneland. Decisions about the future were on hold Saturday afternoon, though, while connections celebrated their good fortune – and their successful planning for the Godolphin homebred.

“(Gaffalione) gave him a fantastic ride,” Godolphin USA bloodstock director Michael Banahan said. “The horse came around the home turn and delivered on what we thought he could do. He was up at Saratoga for the summertime and training super. We expected a big run from him. He won it well. The horse did it all himself.”

No attendance or handle figures were announced Saturday, but it appeared fewer than 10,000 people showed up at Churchill Downs on a sunny, 83-degree day. The Million card was moved from suburban Chicago to Kentucky after Churchill Downs Inc. closed Arlington Park last fall.