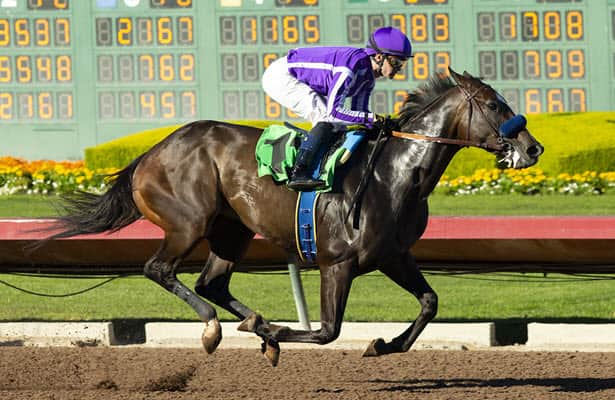 An impressive maiden winner in her most recent start, Bob Baffert’s Under the Stars heads a field of six sophomore fillies going seven furlongs in Saturday’s Grade 2, $200,000 Santa Ynez Stakes at Santa Anita.

Reddam Racing’s Awake At Midnyte, a close second in a one mile turf stakes on Nov. 27, rates a big look as does California-bred stakes winner Big Switch and recent turf maiden winner Miss Mattie B.

A respectable third, beaten three quarters of a length by the well regarded Tonito’s in the 6 ½ furlong Desi Arnaz Stakes two starts back on Nov. 13, Under the Stars came back earn a Beyer Speed Figure of 80 when registering an impressive three length maiden win at Los Alamitos going six furlongs on Dec. 11.

Bet down to the 2-5 favorite in a field of 12, the Kentucky-bred daughter of Pioneerof the Nile, out of the Storm Cat mare Untouched Talent drew away from her competition like a filly of considerable promise for owners Mrs. John Magnier, Michael Tabor and Derrick Smith, in what was her third career start.

A $320,000 March 2-year-old in training sale purchase, Awake At Midnyte pressed the pace and came away a game neck first-out maiden winner going six furlongs on Oct. 31 here at Santa Anita and then stretched out to a mile on turf in the Grade 3 Jimmy Durante Stakes at Del Mar Nov. 27.

A close second early, she wrested control a sixteenth of a mile out but lost a desperate photo by a nose in a huge effort.  By Nyquist out of the Union Rags mare Midnight Union, Awake at Midnyte should be forwardly placed under regular rider Mario Gutierrez.

A California-bred by hot sire Mr. Big, John Sadler’s Big Switch, a first-out maiden winner going six furlongs at Del Mar Aug. 20, followed that up with a 2 3/4 length win going seven furlongs in the Golden State Juvenile Fillies Nov. 5, earning an 80 Beyer Speed Figure.  In what will be her first try in open company, she’ll get the services of John Velazquez.

Owned by her breeder, George Krikorian, Big Switch is out of the Malibu Moon mare Two Faced Moon.

Trained by Bob Hess, Jr., Miss Mattie B rallied from far back to break her maiden going one mile on turf Nov. 27 and will hope to have a similar late kick as she switched back to dirt and shortens up a furlong.  Owned by Westlake Racing, Stable, Miss Mattie B, who will be ridden back by Mike Smith, is a Kentucky-bred daughter of Tonalist out of the Medaglia d’Oro mare Traffic Blimp.

Trainer Jonathan Wong’s speedy Mimajoon also rates a look, as she comes off a gate to wire score on synthetic Tapeta in the Golden Gate Debutante Stakes Nov. 26.  A front-running maiden winner going five furlongs on turf Nov. 13, Mimajoon, a Florida-bred by Fed Biz, out of the Indian Charlie mare Sister Charlie, is owned by her breeder, Scott Herbertson and will be ridden for the first time by Kyle Frey.

*Rating is based on HRN fan votes, which rank the Top Active Horses in training.
Under The Stars Santa Ynez Santa Ynez (2022)