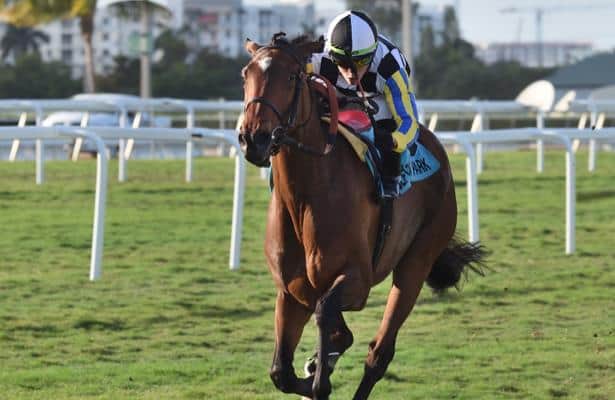 R Unicorn Stable’s Santa Monica unleashed a five wide rally on the turn into the homestretch and just got up to prevail over Ickymasho by a head in Friday’s $100,000 Orchid Stakes at Gulfstream Park.

The 55th running of the Orchid was one of three stakes that kicked off the weekend stakes action at Gulfstream Park, where the Florida Derby (G3) was to headline.

Trained by Chad Brown, Santa Monica was sent to post as the 1-2 favorite in the nine-horse field on the strength of a victory in the Dance Smartly (G2) and a Grade 1 placing in the E.P. Taylor at Woodbine last year. The 6-year-old British-bred mare, who finished off the board in the Nov. 3 Breeders’ Cup Filly & Mare Turf (G1) at Churchill, finished second in the La Prevoyante (G3) on the Pegasus World Cup Day program Jan. 26.

Santa Monica was reserved off the pace by Irad Ortiz Jr, as Giant Zinger set a comfortable pace under Brian Hernandez Jr., posting fractions of 25.13 and 50.93 seconds for the first half mile before going on to cover six furlongs in 1:16.87 over the ‘good’ turf course.

Ickymasho, the 7-2 second betting choice who was tracking the leader under Luis Saez, challenged the pacesetter turning for home and took a narrow lead in the stretch as Santa Monica was in the midst of an impressive five-wide sweep.

Ickymasho edged away to a lead in mid-stretch but was unable to hold off the wide drive of the Brown trainee.

“I didn’t have too many choices by the three-eighths pole. Nobody on the inside moved, so I had to keep her outside. I had to move early and wide, but I had the best horse in the race,” Ortiz said. “Chad Brown’s horses always come ready. They were going slow in front so I knew I had to go early.”

Santa Monica, a daughter of Mastercraftsman, ran 1 3/8 miles in 2:16.07. Ickymasho finished three-quarters of a length ahead of Giant Zinger.