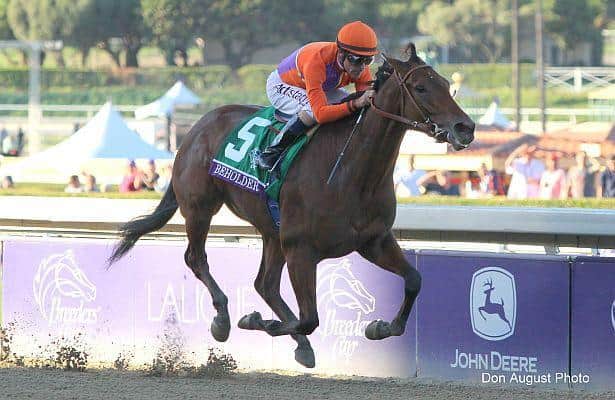 Trainers who entered in Friday’s $75,000 Santa Lucia Stakes might have been surprised to see Beholder in the race.

Embarking on the same path she took to start her 2014 campaign, the two-time Eclipse Award winner makes her 5-year-old debut in Friday’s $75,000 Santa Lucia Stakes for fillies and mares, four and up, at 1 1/16 miles.

The daughter of Henny Hughes began her season in a similarly clandestine fashion in last year’s Santa Lucia, tiptoeing into the restricted stakes she won by 5 ¼ lengths under Gary Stevens, who rides tomorrow. The champion 3-year-old filly of 2013 and 4-year-old filly last year was supplemented to the race each time for $1,500, a paltry sum considering she has earned $3,368,300 thanks to 10 wins and three seconds from 15 starts for owner B. Wayne Hughes.

“I was lucky the race went,” said trainer Richard Mandella. “That was a big concern. It didn’t have to go. She’s doing well although I don’t think she’s up to her best tomorrow, but I think she’s ready to do what she needs to do.”

If all goes well, a logical progression beyond the Santa Lucia would be the Grade I Vanity Stakes on May 9 and the Grade I Ogden Phipps at Belmont Park on June 6.

Richard Baltas may have been one of those caught napping when he entered Melanistic, a durable campaigner who once ran for a $2,500 claiming tag at Los Alamitos in April 2012. The 6-year-old California-bred daughter of Ministers Wild Cat ran second in the restricted Dream of Summer Stakes on March 22, her 43rd career start. She has won 11.

Baltas, enjoying a solid meet with 17 wins through 60 racing days, also nominated Wild in the Saddle to the Santa Lucia.

“I’m just running Melanistic,” he said. “I want to take more time with Wild in the Saddle. Melanistic is doing well; she’s a very hard-knocking horse. We’re having a good meet. We’re holding our own against the big boys with the little horses.”