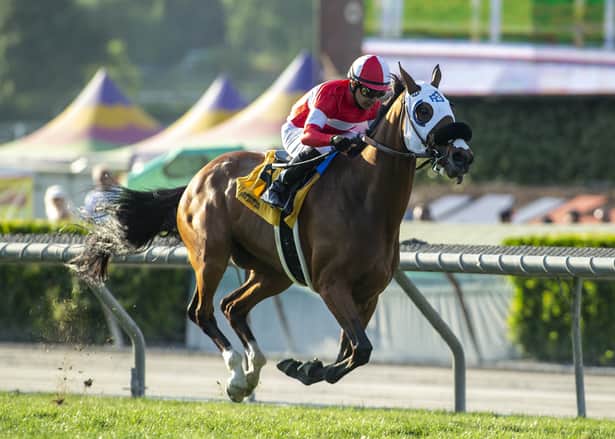 As Yogi Berra once famously noted, “It’s déjà vu all over again.”

Such was the case in the 81st running of the Grade 3, $100,000 San Juan Capistrano Stakes on Saturday at Santa Anita, where 7-year-old California-bred gelding Acclimate (2-1) skipped to a 3 3/4-length victory, replicating his gate-to-wire score in the 2019 running of the race.

Trained by Phil D’Amato, who collected his third consecutive win in Santa Anita’s signature turf marathon, Acclimate was ridden by Ricky Gonzalez, who coaxed 1 3/4 miles out of the son of Acclimation in 2:49.74.

With a traditional hillside start on firm turf, Acclimate went right to the front and had his ears up as he made the dirt crossing at the top of the lane. With a two-length advantage around the clubhouse turn, Acclimate was running easily while pursued by Ward ’n Jerry and Pillar Mountain in the run up the backside.

With three furlongs to run, Gonzalez stepped on the gas, but eventual runner-up Astronaut was about to make an eye-catching run of his own around the far turn. Although he loomed into contention a quarter-mile out, Astronaut was unable to sustain his bid and Acclimate made it look easy as he widened his margin late.

“Just get him in front, nice and comfortable is where he likes to be,” said Gonzalez, who had ridden him to a close second-place finish going 1 1/4 miles on the turf in the Charles Whittingham Stakes (G2) on May 29.  “Just keep the other horses away from him, and he’s as happy as he could be. I was really happy.”

Bred by Old English Rancho and Sal and Patsy Berumen, Acclimate is out of the Boundary mare Knows No Bounds, is owned by the Ellwood Johnston Family Trust, Timmy Time Racing and Ken Tevelde. He had been winless since winning the Del Mar Handicap (G2) nine starts back on Aug. 17, 2019.

Melair Stakes. Unexpectedly last early, Terry Lovingier’s homebred Fi Fi Pharoah (2-1) battled through the lane with Eddie’s New Dream to win by a half-length as the favorite in the Melair.

Breaking from the post 3, Fi Fi Pharoah found herself last in a field of eight, about 10 lengths off of dueling leaders Mucha Woman and Omg It’s Jessica around the clubhouse turn.

Next to last by a similar margin and on the move with three furlongs to run, Fi Fi Pharoah wheeled four-deep turning for home as a hot, early pace took its toll on the frontrunners.

With Eddie’s New Dream and Mario Gutierrez taking the lead at the top of the lane, Fi Fi Pharoah joined the battled with a furlong to run and prevailed in a game effort.

Snow Chief Stakes. Attentive to the pace throughout, longshot Jimmy Blue Jeans (15-1) was all heart late as he held off heavily favored None Above the Law (1-1) by a neck in Saturday’s Snow Chief Stakes at Santa Anita.

Trained by Golden Gate Fields-based Andy Mathis, Jimmy Blue Jeans got the 1 1/8 miles in 1:48.69. He was ridden by Kent Desormeaux, who notched his 147th career stakes win at Santa Anita.

A 3-year-old gelding by James Street out of the Marino Marini mare Blue Blizzard, Jimmy Blue Jeans is owned by his owner-breeders Perry Bruno and John Gezon.

Ferrariano (12-1), ridden by Abel Cedillo, finished a nose behind None Above the Law in third.

Siren Lure Stakes. With a new lease on life at age 4, the Richard Mandella-trained Kanderel (4-1) rallied from last to take the Siren Lure Stakes, his second win in a row over the course at Santa Anita.

Ridden by Juan Hernandez, Kanderel got 6 1/2 furlongs on turf in 1:14.98. Breaking from the rail, Kanderel was about six lengths off dueling leaders Texas Wedge and Tilted Towers heading to the far turn and had nearly five lengths to make up while racing wide with a furlong to run.

A 4-year-old gelding by Candy Ride, out of the Storm Cat mare Stormica, Kanderel is owned by his breeders, the Wertheimer brothers. With the Siren Lure being his second stakes victory, Kanderel is 13: 4-1-0, adding a winner’s share of $48,360 to increased his earnings to $195,982.

Ridden by Joe Bravo in his first full-time weekend in California, French-bred Commander (5-1) ran a game second, finishing a neck in front of favored Chasin Munny (6-5), who settled for third.