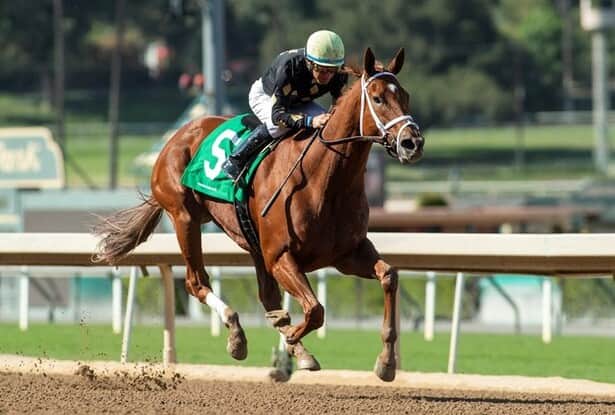 “She’s doing well and Victor fits her and knows her well,” trainer Michael McCarthy said of the 5-year-old mare by Elusive Quality out the Grade 1 winner Miss Houdini.  “They’ve been successful together.”

Owned by Bo Hirsch, Ce Ce has been ridden by Espinoza in 12 of her 14 career races, winning six.

McCarthy also said his Preakness winner Rombauer, idle since running third in the Belmont Stakes, recently enjoyed some R&R and is scheduled to return to Santa Anita “in about 10 days.”

Miller gets ready for Breeders’ Cup

Always a threat to win a training title anywhere he competes on a full-time basis, Peter Miller, who celebrated his 55th birthday last Saturday, already ranks among the leaders at Santa Anita with five victories after five racing days of the fall meet.

Miller is focused on the Breeders’ Cup next month at Del Mar, hard by his home in Encinitas, Calif., fewer than six miles from the seaside track. Two of his primary candidates are Mo Forza for the Mile and C Z Rocket for the Sprint or the Dirt Mile.

“Mo Forza came out great from his win in the City of Hope Mile (last Saturday at Santa Anita), and we’re looking forward to and excited about the Breeders’ Cup,” Miller said.

Mo Forza, a 5-year-old Uncle Mo entire, gained millionaire status with his City of Hope victory and has eight victories from 14 career starts.

“He’s tactical, but if they go real fast, he can sit back. He’s quite a horse,” Miller said. “We’re considering the Sprint as well as the Dirt Mile for C Z Rocket.

C Z Rocket’s forte is stalking rather than being on the lead, a concern for Miller.

“The track profile at Del Mar is for speed,” Miller said, “and it may play against him in the Sprint, so we’re considering the Dirt Mile.”

Loud Mouth sounds off next weekend

One such Cal-bred is Loud Mouth, claimed for $40,000 in July 2019 and the winner of two subsequent restricted stales, the Cary Grant at Del Mar last Nov. 22 and the E.B. Johnston on Sept. 12 when promoted from second at Los Alamitos.

An entire by Boisterous, the versatile 5-year-old is trained by Steve Knapp for principal owner Ron Thomsen.