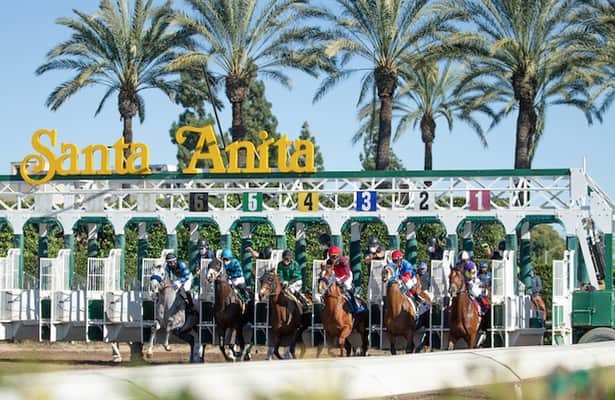 After a blockbuster summer at Del Mar, and a brief stop at Los Alamitos, the Southern California racing circuit moves to Santa Anita for a six-week stand starting Friday.

Santa Anita will host 18 days of racing ending on Nov. 6, which is the Sunday following the Breeders’ Cup. A total of 26 stakes will be run, which includes five “win and you’re ins” for the Breeders’ Cup beginning with Saturday’s $300,000 Awesome Again (G1) for older dirt horses.

The nine-race opening day program averages just 6.9 starters per race before scratches. Things do pick up on Saturday. That 10-race card features six stakes, five of which have Breeders’ Cup implications, and averages a more player-friendly 7.9 starters per race.

The Awesome Again, scheduled for 7:08 p.m. EDT, attracted a field of eight including four runners trained by Bob Baffert. Dubai World Cup (G1) winner Country Grammer is the 8-5 morning-line favorite following a distant second to Flightline in the Pacific Classic (G1) earlier this month for Baffert.

Also bidding for a fees-paid berth in the $6 million Breeders’ Cup Classic at Keeneland are 3-1 second choice Royal Ship for trainer Richard Mandella and Express Train, the 7-2 third choice for trainer John Shirreffs.

On Sunday, Santa Anita will host three more stakes for Breeders’ Cup hopefuls: the 1 1/16-mile Zenyatta (G2) for fillies and mares, five-furlong Speakeasy for juveniles on turf, and the six-furlong Chillingworth (G3) for filly and mare sprinters that could feature reigning champion Ce Ce.

At last year’s Santa Anita fall meet, Doug O’Neill won at a robust 27 percent clip to take home the trainer’s title with 21 victories. Peter Miller was a distant second with 11 wins and he was followed by Phil D’Amato (9).

There promises to be a new leading jockey at this year’s meet. Last year’s top rider, Flavien Prat, has since moved his tack to New York full time. Prat had won three straight Santa Anita fall meet titles. Juan Hernandez, last year’s runner up in the jockey’s standings, has emerged as the new No. 1 in Southern California. He won the riding title both at the Santa Anita winter-spring meet and Del Mar.

For horseplayers, Santa Anita will offer an early pick 5 and late pick 5 as well as at least two pick 4’s. Note the early pick 5 has a reduced takeout of 14 percent. By contrast, the late pick 5 takeout is 23.68 percent.

Santa Anita will once again offer a jackpot pick 6 wager with a 20-cent minimum. The jackpot Pick 6 pays out the entire pool minus takeout if there is one unique winning ticket. However, if there are multiple winners, 70 percent of the pool is paid and 30 percent will be carried over to the next program.

Two bets that are unique to California racing are the Golden Hour Daily double and Golden Hour Pick 4. Each wager combines races from both Santa Anita and Golden Gate Fields.