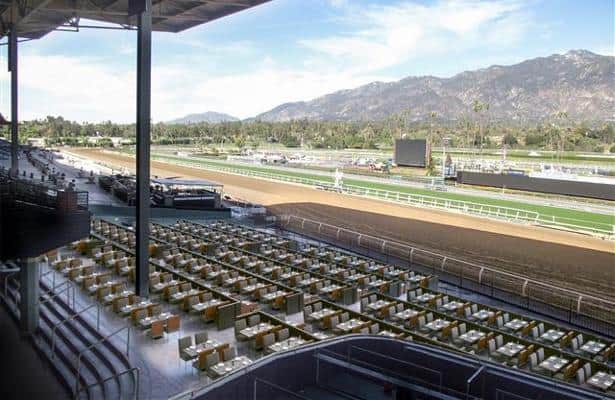 With strong rains predicted to hit Southern California over the next several days, Santa Anita Park has decided to cancel its Friday program, effective Tuesday morning.

Friday’s entries originally were scheduled to close this past Sunday, but track management opted to wait until Tuesday in order to better evaluate the weather forecast.

In addition to Friday’s cancellation, given the amount of rain predicted over the next few days, two turf stakes, the Grade 2 San Marcos on Saturday and the $75,000 Baffle on Sunday, now will be shifted to next week. The 6 1/2-furlong Baffle will be run on Friday, Feb. 5, and the 1 1/4-mile San Marcos now is set for Saturday, Feb. 6.

“The models are showing us three straight days of rain, with the heaviest hitting around noon on Friday,” said Nate Newby, Santa Anita senior vice president and general manager. “We’ve discussed it with our stakeholders and cancelling Friday in advance provides horsemen, fans and employees the best scenario to plan accordingly.”

Santa Anita will schedule extra races during the next racing week to make up for those that originally were scheduled for this Friday.

With entries scheduled to be taken Wednesday, Jan. 27, racing will resume at Santa Anita on Saturday, Jan. 30. A pair of important main track stakes, the $100,000 Robert B. Lewis (G3), a key prep to the Santa Anita Derby, and the $200,000 San Pasqual (G2), an iconic precursor to the Santa Anita Handicap, will highlight Saturday’s racing.