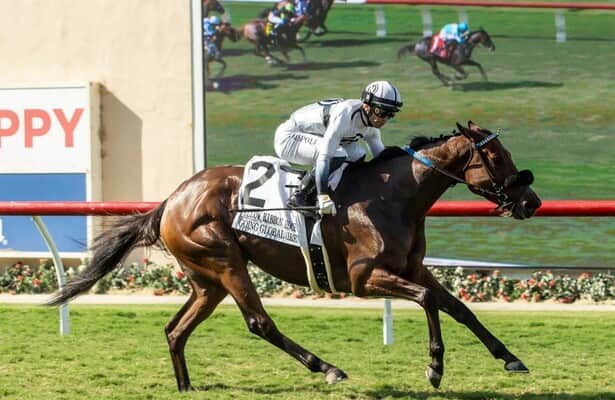 Ireland-bred Going Global and France-bred Avenue de France will meet for the third consecutive time as they head a field of six fillies and mares, 3 and up, in Saturday’s Grade 2, $200,000 Goldikova Stakes at one mile over the Santa Anita turf.

One of three graded stakes on the card, the Goldikova is named for the France-bred mare who won the Breeders’ Cup Mile vs. males three consecutive years from 2008 through 2010 and who was a two-time Eclipse Award winner in North America. The Goldikova was carded as race 3 on a 10-race program Saturday and was penciled in for a 5 p.m. EDT start.

Going Global was beaten by a half-length by Avenue de France as the 1-2 favorite going a 1 1/8 miles on turf in Del Mar’s John C. Mabee (G2) on Sept. 10. She had defeated Avenue de France by three lengths in the Yellow Ribbon Handicap (G2) two starts back, and she will hope to benefit from the shorter distance of one mile on Saturday in what will be her career finale.

A 4-year-old filly and one of two Phil D’Amato entrants, Going Global, the defending Goldikova champ, is a 2-for-2 at one mile over the Santa Anita turf and is 5-for-6 overall over the course.

Ridden patiently by regular rider Umberto Rispoli in the Mabee at Del Mar, Avenue de France, in a bold move three furlongs from home, got the jump on Going Global, who never culd get back on terms with the winner, including in the run-out well past the wire.

“Hopefully, we can send her out a winner,” said D’Amato, who said Saturday that Going Global will go through the sales ring at Fasig-Tipton’s in Kentucky on Nov. 6.

Trained by Leonard Powell, Avenue de France’s connections will hope to make it two wins from three engagements with Going Global on Saturday.

Off at 10-1 in the John C. Mabee, Juan Hernandez, who has won two of his three engagements with Avenue de France, took his best shot heading into the far turn. It paid off as she notched the biggest win of her career.

A 5-year-old mare who would be best suited lagging back off of a fast pace, Avenue de France made a tremendous run from far back in the one-mile turf Osunitas three starts back on July 23.

With Powell at the developmental controls, Avenue de France appears to be at the peak of her powers as she approaches her 23rd career start and her 21st in Powell’s care. Owned by the Benowitz Family Trust, Convergence Stables, Madaket Stables, Wonder Stables and Mathilde Powell, Avenue de France is a five-time stakes winner and is 22: 8-2-5 overall with earnings of $525,066.

One of three graded stakes on the card, the Goldikova is named for the France-bred mare who won the Breeders’ Cup Mile vs. males three consecutive years from 2008 through 2010 and who was a two-time Eclipse Award winner in North America. The Goldikova was carded as race 3 on a 10-race program Saturday.

War At Sea tries to maintain form in Twilight

Third, beaten by one length in the Del Mar Derby (G2) under the same conditions Sept. 3, War At Sea had a three-race winning streak snapped. It dated to a one mile maiden turf win here on March 5. He was a three-quarter-length winner over well-regarded Cabo Spirit in the ungraded Cinema Stakes at 1 1/8 miles on grass on June 4.

A Kentucky-bred colt by War Front out of the Street Cry mare Serene Melody, War At Sea has three wins and as many thirds from six starts this year as he seeks his first graded-stakes victory. Trained by Ron Ellis and owned by Doubledown Stables, War At Sea will be ridden for the fifth consecutive time by Mike Smith.

Trained by George Papaprodromou, Cabo Spirit, who took the La Jolla Handicap (G3) two starts back at 1 1/16 miles on turf, finished a disappointing fifth in the Del Mar Derby as he flattened out to be beaten by 2 1/2 lengths.

Owned by Kretz Racing, 3-year-old Pioneerof the Nile gelding Cabo Spirit was purchased for $575,000 out of an Ocala 2-year-olds sale. With Joe Bravo set to ride back for the sixth consecutive time, Cabo Spirit brings earnings of $318,560 from an overall mark of 14: 3-3-3.

A two-time graded-stakes winner routing over the Santa Anita turf during the spring, Cairo Memories returns for the first time since May 29. She heads a field of 12 3-year-old fillies going one mile on turf in the $100,000 Autumn Miss (G3) at about 8:30 p.m. EDT.

A winner going 1 1/8 miles on turf of the Providencia (G3) on April 9 and the Honeymoon Stakes (G3) May 29, Cairo Memories then ventured to New York, where she showed the way early prior to checking in fifth, beaten three lengths going 1 3/4 miles on turf in the Belmont Invitational Oaks (G1) on July 9.

Idle since finishing third, beaten 5 3/4 lengths in the Del Mar Oaks (G1) on Aug. 20, Cairo Memories is by Cairo Prince out of the Indian Charlie mare Incarnate Memories,.

Owned by David A. Bernsen and Schroeder Farms, Cairo Memories will be ridden for the sixth consecutive time by Mike Smith. With an overall mark of 9: 4-1-1, she has earnings of $418,500.