Santa Anita: D’Amato is on verge of winter-spring training title 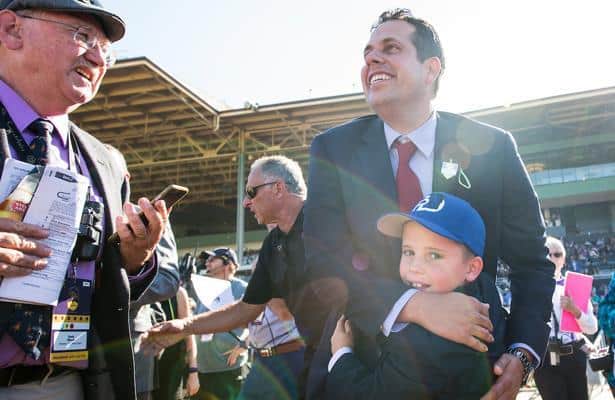 Santa Anita’s leading trainer Phil D’Amato hopes to cap the final weekend of a glorious meet with a flourish when he sends out Leggs Galore in Sunday’s Grade 3 Wilshire Stakes for fillies and mares, 3 years old and up, at a mile on the turf.

Should the 4-year-old gray daughter of 2014 Breeders’ Cup Classic winner Bayern win, it would give her four stakes victories at the meet, her only loss coming in the Mizdirection Stakes, in which she experienced a troubled trip.

“She’s training well, so hopefully it’s all systems go for Sunday,” said D’Amato, who holds a 48-43 lead over runner-up Peter Miller in the trainers’ standings, exceeding his expectations.

“I thought my stock would take a little longer to blossom,” D’Amato said, “but we struck early on and kept it rolling. It’s basically a credit to my owners and my team. We hope to keep things going like they’re going.”

Owned and bred by William Sims, Leggs Galore on May 9 won the Fran’s Valentine stretching out to a mile for the first time, leading throughout against California-breds. She has won six of her last seven starts, including a string of five straight prior to her Mizdirection mishap.

Despite being five wins behind, with eight horses entered the final two days of the meet to D’Amato’s 13, Miller still held a mathematical chance of capturing the title. Miller had three horses entered Saturday: 2-1 morning-line favorite Texas Wedge and 5-1 chance Commander in the third race and 9-5 favorite None Above the Law in the ninth.

Sunday, Miller has five entered: 8-5 Paid Informant in the second, 4-5 Neptune’s Storm in the seventh, 5-2 Laurel Canyon in the eighth, 12-1 Querelle in the ninth and 3-1 Gypsy Blu in the 11th and final race.