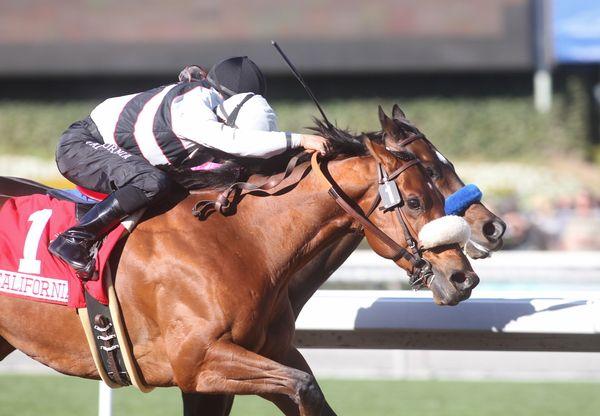 California-bred Amazombie remained on course for his 2012 debut in the Grade II San Carlos Stakes on Feb. 25 after working six furlongs in the dark Friday on Santa Anita’s main track in a bullet 1:12.40 under jockey Alex Bisono.

“He went off the first three-eighths in 36 and change and from the three-eighths pole to the wire he went in 35 and one,” trainer Bill Spawr said of the Breeders’ Cup Sprint winner and Eclipse Award winner as outstanding male sprinter of 2011. “The last eighth was like 11 and change. He did it easy.

“Alex Bisono worked him again. He gets along with the horse really well. He said the horse was so strong, he had a cross on him and he broke his cross.”

Added Bisono: “Sometimes, when he’s doing really good, he’ll break my cross. He has so much power when he moves over the track. I can’t explain it. It’s an amazing feeling just to get on him.”

Amazombie, a 5-year-old Northern Afleet gelding, has not run since winning the BC Sprint on Nov. 5. He had been set for the Jan. 21 Palos Verdes Stakes but was scratched due to an off track.