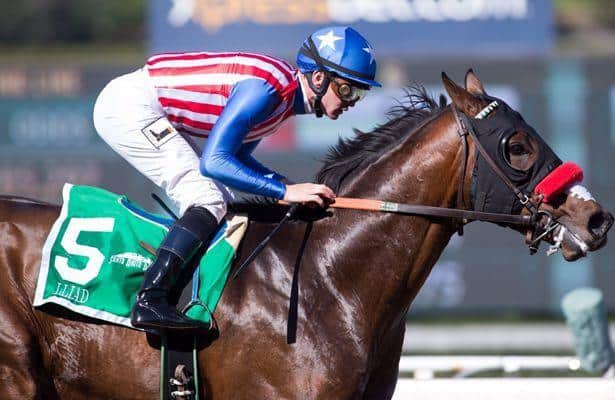 FINISH LINES: Stellar Wind, champion three-year-old filly of 2015, worked six furlongs Friday for John Sadler under Victor Espinoza in 1:13 prepping for her 2017 debut in the Apple Blossom Handicap at Oaklawn April 14. She went in company with Mr.Opportunist who was clocked in 1:13.60. “She went good,” Espinoza said of Stellar Wind, two-time conqueror of four-time champion Beholder. “She’s going in the right direction.” . . . There is a single ticket Pick Six Jackpot carryover of $368,689.71 into Friday . . . Martin Garcia, Mario Gutierrez and Gary Stevens ride at Sunland Park in New Mexico Sunday. Joe Talamo was scheduled to ride Kimbear for Eric Kruljac there Sunday, but the trainer had an 11th hour change of heart and is passing the Sunland Derby. The son of Temple City is a late nominee to the Santa Anita Derby . . . What aView, winner of the Grade I Frank E. Kilroe Mile on grass last year, worked four furlongs on the training track Friday in 49.40 for trainer Kenny Black, who was aboard the six-year-old California-bred Vronsky gelding. “It was the best he worked in the three years I’ve had him,” Black said. It was the first breeze for What a View since his crushing head loss to Bal a Bali in this year’s Kilroe on March 11. “I can’t say enough about this turf course,” Black said. “Horses just come out of the grass races here in great shape.” Black said What a View’s next start could either be in Southern California or out of town.