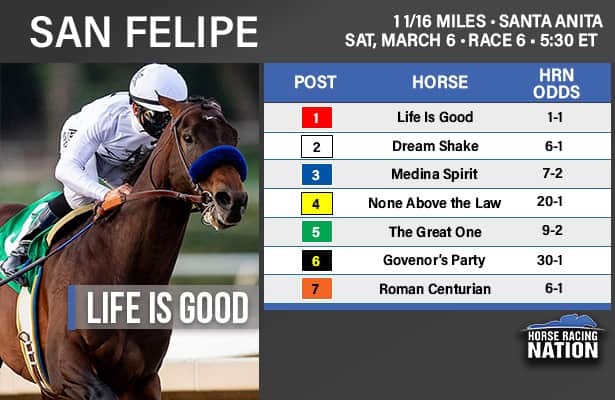 Even though trainer Bob Baffert brings two exciting 3-year-old colts to the Grade 2, $300,000 San Felipe Stakes at Santa Anita Park on Saturday, including the expected heavy favorite Life Is Good, the race is not a stone cold lock for his barn.

Life Is Good and Medina Spirit face two interesting newcomers to the group in Dream Shake and The Great One, both of whom offer reasons to side with them.

The San Felipe Stakes is carded as Race 6 with a post time of 2:30 PT. Odds are from HRN.

1. Life Is Good, 1-1 (Into Mischief – Bob Baffert/Mike Smith – 2: 2-0-0 - $94,200): With two wins in two starts, including the Sham Stakes (G3) with a 120 TimeformUS Speed Figure, playing against this speedy Baffert entry might sound crazy at first glance. To nitpick his form though, he began to lose ground to his stablemate Medina Spirit in the Sham victory and only held on by three-quarters of a length.

In this spot, Life Is Good stretches out slightly to a new distance as the heavy favorite, and a common handicapping rule states to use caution with favorites trying a new distance or surface. Life Is Good is capable of taking to them gate to wire again, but the projected low odds do not justify the risk, at least not in Win bets or in other vertical wagers. Rather, he is usable defensively in multi-race wagers. Win contender.

2. Dream Shake, 6-1 (Twirling Candy – Peter Eurton/Joel Rosario – 1: 1-0-0 - $33,600): Dream Shake posted a 118 TimeformUS Speed Figure in his Feb. 7 maiden win on this course, which is in the same ballpark as Life Is Good’s 120 in the Sham Stakes. However, there are some caution flags to consider before trusting this Twirling Candy colt. For one, he stretches out from 6 ½ furlongs to a two-turn route. Dream Shake’s pedigree is likely not a problem for this distance, but it is still a rough guess until he proves himself.

Also, he jumps from a maiden race to a Grade 2 in his second career start. He also draws unfavorably between the two Baffert entries. Although Dream Shake’s raw talent might carry him to a win anyway, there are many obstacles. Given his inexperience, he fits better in the bottom slots for now. Use underneath.

3. Medina Spirit, 7-2 (Protonico – Bob Baffert/John Velazquez – 3: 2-1-0 - $105,200): Medina Spirit gave a great performance in the local Robert B. Lewis Stakes (G3). After setting a fast early pace, he put away his pace opponents in Parnelli and Wipe the Slate, before holding off Roman Centurian and Hot Rod Charlie in the lane. TimeformUS backs up the notion of a fast pace, as Medina Spirit set early pace figures of 151 and 151 before tiring in the later stages to a 128 and 116. His final figure of 111 was adjusted to a 117 because of his pace efforts.

The San Felipe offers a chance for Medina Spirit to revert back to a tracking or stalking style, although that possibly means leaving his talented stablemate alone. But if Life Is Good receives pressure or cannot handle the distance, this one could win. Win contender.

4. None Above the Law, 20-1 (Karakontie – Peter Miller/Flavien Prat – 5: 1-1-1 - $61,300): Considering None Above the Law lost the California Cup Derby in his last start and ran a distant third by 6 ¾ lengths in a starter allowance at Del Mar last November, it is difficult to understand why Miller wants to try the San Felipe. In None Above the Law’s favor, Prat decides to give this Cal-bred a shot. Perhaps Millers knows something that bettors cannot see. Regardless, he is unusable. Toss.

For what it is worth though, The Great One sports two 101 BRIS Speed Ratings, giving him the highest numbers on that scale. Also, Fenway was last by 29 ½ lengths in The Great One’s maiden romp, yet he came back with a solid runner-up finish on Feb. 15 with a 103 on TimeformUS. The Great One also draws perfectly in Post 5, giving Cedillo a chance to watch the favorites to his left before deciding where to position himself.

The Great One does need to either press Life Is Good and overcome him, or hope another horse sacrifices himself in a duel while he sits a few lengths back. While taking a shot on this horse against Life Is Good is a risk, at least he knows how to route and shows proven graded stakes experience against a decent runner in Spielberg. The pick.

6. Govenor’s Party, 30-1 (Govenor Charlie – Daniel Franko/Mario Gutierrez – 7: 2-0-1 - $45,670): This Cal-bred ran a mild third in the El Camino Real Derby up north. Prior to that, he also won a starter allowance on the same course. In terms of dirt experience, he broke his maiden via disqualification at Del Mar in a claiming race last November. He then ran 10th and last in the King Glorious Stakes at Los Alamitos, making it unlikely he can compete against this caliber of horses. Toss.

7. Roman Centurian, 6-1 (Empire Maker – Simon Callaghan/Juan Hernandez – 3: 1-1-0 - $60,020): Although Roman Centurian did close for second in the Robert B. Lewis Stakes (G3) and only lost by a neck to Medina Spirit, he was the beneficiary of a rapid pace set by the winner. Despite Medina Spirit getting tired in the stretch after the early pace work, Roman Centurian could not pass him in the lane. Roman Centurian even held the outside rallying position, while the sandwiched Hot Rod Charlie had a minor excuse in running between them.

Because Roman Centurian took advantage of the pace, TimeformUS did not mark up his figure from the original 111 either, making him well behind the top players. But if the pace heats up again though, he could close well enough for a bottom slot again. Use underneath.

From a value standpoint, The Great One is the right horse to play in vertical wagers as a Win or Place bet. If Life Is Good fails to hit the Exacta, the place spot figures to pay more than expected with the majority of the public placing big money on him.

In the Pick 3 or 6 though, bettors might need to use The Great One, Life Is Good and Medina Spirit, in that order of preference. If the multi-race wager becomes too expensive in other legs of the ticket, then think about cutting off Medina Spirit.