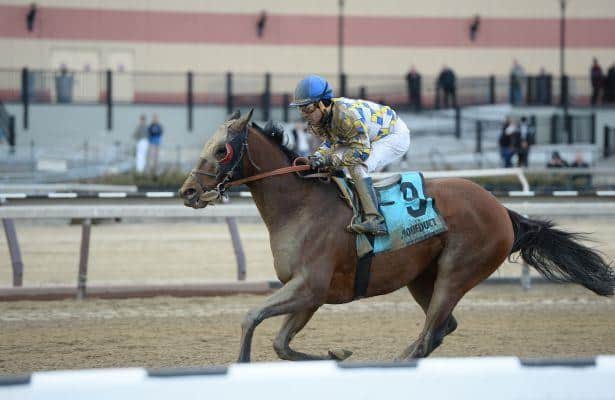 David Jacobson and Southern Equine Stable’s Salutos Amigos, winner of the Carter Handicap (GI) in his most recent start, and C R K Stable’s Kobe’s Back, the top sprinter on the West Coast, top a field of nine for the 82nd running of the $500,000 Churchill Downs (GII) at seven furlongs on the main track.

The Churchill Downs will go as the seventh race with a 1:55 p.m. post time.

Trained by Jacobson, Salutos Amigos also won the Tom Fool (GIII) after returning to New York following a two-race stay in California in which he finished second in the Palos Verdes (GII) and Midnight Lute (GIII). Cornelio Velasquez will have the mount and break from post position eight.

Kobe’s Back, trained by Peter Eurton, won the Palos Verdes and, in his most recent start, the San Carlos (GII). Gary Stevens, who has won the Churchill Downs three times, has the mount and will break from post position one.

Also expected to draw support is Katherine Ball’s Limousine Liberal. Trained by Ben Colebrook, Limousine Liberal established a Keeneland track record for 6 ½ furlongs in his 2016 debut on April 9. Luis Saez has the mount and will break from post position five.