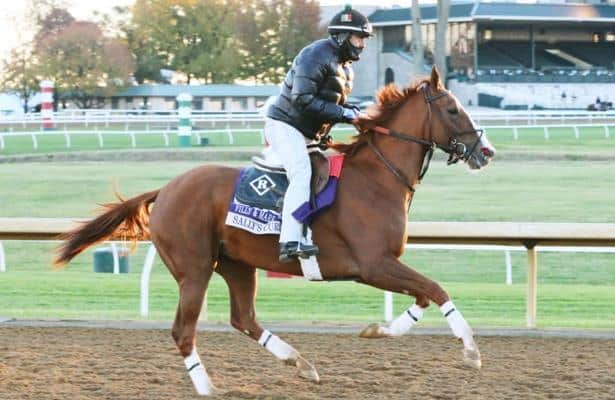 Sally's Curlin, owned by CJ Thoroughbreds, Left Turn Racing and Casner Racing’, is a 4-year-old daughter of two-time Horse of the Year and Hall of Famer Curlin. Trained by Dale Romans, she broke near the far outside and found herself trailing the field for most of the seven-furlong Filly & Mare Sprint Nov.7 at Keeneland. Unable to make up ground on a course where early speed proved successful, the typically late-running filly finished ahead of one horse.

“That was a bad day for her," Romans said. "You can go back and look and I don’t complain about racetracks, but I thought the track was very unfair that day. It was not only speed but rail-biased, and I think more rail than anything. We were wide on all our races.”

Sally’s Curlin rallied to be third in the Derby City Distaff (G1) on Sept. 5, also at seven furlongs, in her Breeders’ Cup prep. She has one win from four starts this year, a last-to-first 2 3/4-length triumph in the Hurricane Bertie (G3) March 14 at Gulfstream to kick off her 2020 campaign.

“She was up against it because she comes from off of it. It’s easy to draw a line through those kinds of races with a horse that’s doing good and go on to the next one, and that’s what we’re doing,” Romans said. “She likes it at Gulfstream and she’s won coming back off a bad performance, so we’re optimistic that she can do it again. We feel good about her.”

Sally’s Curlin will be racing at one mile for the first time since the Chilukki, a distance where she owns four wins from five career tries. She ran third in a March 2019 maiden special weight in her only other race at Gulfstream. Corey Lanerie has the mount from Post 3 in a field of six.

“The distance should hit her right in the head,” Romans said.

Fresh off leading owner and trainer titles at Gulfstream Park West’s Fall Turf Festival that preceded the Championship Meet, Rohan Crichton will send out Bajan Girl in search of her fourth career win and first in a graded-stakes.

Owned by Robert Slack and Daniel Walters, Bajan Girl, is a sophomore daughter of champion sprinter Speightstown. She enters the Rampart off back-to-back front-running victories Oct. 8 and Nov. 4 at Gulfstream West by 21 1/2 combined lengths. Both wins were at one mile and followed a five-month break after she ran 11th in the Honey Ryder on the Gulfstream turf.

Bajan Girl ran four times during last winter’s Championship Meet, breaking her maiden going 1 1/16 miles on the grass March 8 and coming back to be fourth in the Gulfstream Park Oaks (G2) on dirt behind Swiss Skydiver, who would go on to beat males in the Preakness (G1).

“I think it was that effort that really led me astray, because I immediately thought about going to the (Kentucky) Oaks and all of that and she just wasn’t ready,” Crichton said. “She had a setback, which I think was all my fault. I probably shouldn’t have run her back so quick after the Oaks, and then I put her on the turf, which was a dumb thing to do. She had a very slight muscle strain out of that race on the grass. We just gave her the time and she’s blossoming. I think she’s going to run a good race.”

Two-for-three at one mile, Bajan Girl has proven to be versatile in her seven-race career, winning both on the front end and overcoming early trouble to come from off the pace in her maiden score. Hall of Famer Edgar Prado rides from Post 2.

“The good thing about her is that she’ll do anything the rider asks her to, and that’s her biggest asset. She will just relax, or if she needs to show some speed, she will,” Crichton said. “That gives her her big kick up the lane, because she’s able to be attentive to the rider’s instructions.

“She’s always been a very smart, intelligent filly and what has happened is that physically she’s just starting to mature,” he added. “We’re very excited about her, I can tell you that. And I’ve learned my lesson.”

St. George Stable’s Letruska cuts back after back-to-back graded-stakes at 1 1/8 miles, including a front-running triumph in the Shuvee (G3) Aug. 30 at Saratoga. Winner of the one-mile Added Elegance in June at Gulfstream, the 4-year-old filly owns 10 career wins and captured two Group 1 stakes in Mexico as well as the 2019 Copa Invitacional del Caribe against males at Gulfstream.

Also entered are Dream Marie, third in the Davona Dale (G2) last winter at Gulfstream and second in the Delaware Oaks (G3) on July 4; Good Credence, a 6 1/4-length optional claiming allowance winner last out on Oct. 17 at Belmont Park; and Escena runner-up Crumb Bun, most recently sixth in an off-the-grass Millions Filly & Mare Turf Preview on Nov. 22 at Gulfstream West.