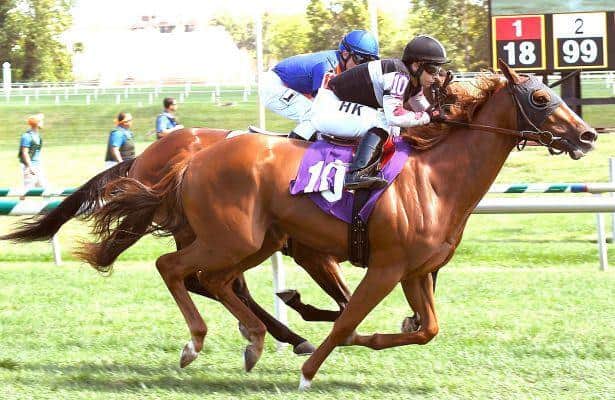 Sagamore Farm homebred Chubby Star was a resolute winner of her career debut Sunday at Laurel Park, emerging from a stretch duel with She’slikethewind for a half-length victory in the featured fourth race.

A chestnut daughter of Malibu Moon out of the Giant’s Causeway mare Salsa Star, Chubby Star ran a 1:38.63 mile over a firm Kelso Turf Course in the $40,000 maiden special weight event.

Sent off at 8-1 in a field of 10, Chubby Star ($19.40) was reserved early and in the clear outside under jockey Horacio Karamanos as 50-1 long shot Brainchild ran a quarter-mile in 24.84 seconds and a half in 49.69, tracked by She’s a Hot One and even-money favorite Colby Cakes on the inside.

The leaders were unchanged through six furlongs in 1:14.41 when She’slikethewind began to launch her bid with Chubby Star glued to her right flank. Karamanos stayed outside as She’slikethewind split horses straightening for home, and the two hooked up in mid-stretch for a head-to-head drive to the wire.

“My filly looked good. She did everything right. She broke good and I got position. On the first turn it was a little bit tight. My filly, the first eighth of a mile, I couldn’t relax her good, but on the backstretch, she relaxed so good behind [She’slikethewind],” Karamanos said. “I followed her and when I asked her at the quarter pole, she gave me a nice kick. [She’slikethewind] was coming through between horses, so I pushed a little bit. He made me float out a little bit but she gave me a good kick to the end. She was looking around a little bit as first-time starter, but I think she can improve a lot, this filly.”

Chubby Star showed a steady string of works at Laurel Park for trainer Horacio DePaz, who was at Saratoga Race Course Sunday where Sagamore-owned 2-year-old Recruiting Ready was disqualified from second to fourth for interference as the 2-5 favorite in the Saratoga Special (G2).