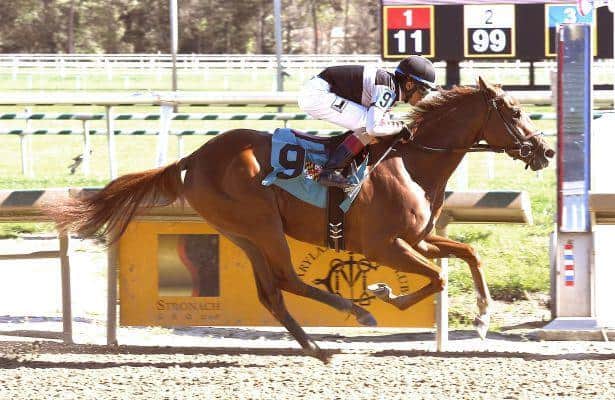 Fifth as the favorite in her unveiling, Riley’s Choice ($4.60) was sent off as the 6-5 top choice in a field of nine for the $40,000 maiden special weight. The juvenile daughter of Distorted Humor ran six furlongs in 1:11.09 over a fast main track.

“When she debuted we thought she would put in a good effort … and first-time experience kind of got to her probably,” winning trainer Horacio DePaz said. “Coming into this race she was working pretty consistently so we thought that she would perform but after the first race you’re always kind of wondering, making sure they’re not morning glory-type horses.”

Jockey Victor Carrasco sent Riley’s Choice from outside post 9 before settling her on the lead as Sympathetic and My Chesa Charm took turns stalking behind fractions of 22.28 and 46.71 seconds. Riley’s Choice extended her lead at the top of the stretch and accelerated again as Aiden’s Rag Doll made a belated run for second as Sympathetic checked in third.

Fitzhugh LLC’s Struth, winless with four seconds from five previous tries at Laurel Park, swept to the lead on the far turn and outran 19-1 long shot Negrito down the stretch to capture Sunday’s featured eighth race.

It was the second win of the day for trainer Mike Trombetta and second straight feature victory at Laurel for jockey Luis Garcia after leading John Jones to his third consecutive triumph on Saturday.

Garcia got the call in the second-level $45,000 optional claiming allowance for 3-year-olds and up, his first aboard Struth, who returned from nearly 19 months between races with an allowance win May 26 at historic Pimlico Race Course. He was second in three straight races, beaten a total of five lengths, before finishing fifth going a mile Sept. 16.

“I know he’s a really nice horse. The only issue is that he does get out a little bit so you have to be gentle with him,” Garcia said. “I don’t really know him so I just tried my best. Right when we got to the quarter pole I thought we were home because when I tapped him on the shoulder he just started running.”

Struth menaced pace-setting Heliskier through a quarter-mile in 23.28 seconds until taking over after a half in 46.65 chased by Negrito with Blu Moon Ace in close pursuit. Struth straightened for home with the lead on the outside and was strong in dismissing Negrito late, hitting the wire in 1:10.30 for six furlongs over a fast main track.

Favored at 7-5 in a field of seven, Struth returned $4.80 to win. Right Squall came running late to catch Blu Moon Ace for third.

Gates will open at 11 a.m. with the change, which remains in effect through the end of Laurel’s fall meet Dec. 31.

A total of 100 horses were entered on Friday’s card, an average of 11.1 per race. Six races are scheduled for Laurel’s world-class turf course which attracted 76 entries, averaging 12.7 per race.

The Rainbow 6 carryover jackpot is only paid out when there is a single unique ticket sold with all six winners. On days when there is no unique ticket, 60 percent of that day’s pool goes back to those bettors holding tickets with the most winners while 40 percent is carried over to the jackpot pool.

Notes: Trainer Horacio DePaz saddled a pair of winners for Sagamore Farm in Riley’s Choice ($4.60) in the fifth race and Enough Is Enough ($6.40) in the ninth. Enough Is Enough was ridden by apprentice Kevin Gomez, the second of his two wins on the day following Tiz Showbiz ($5.20) in the second. Mike Trombetta won with Dynaformersrequest ($16) in the sixth race and Struth ($4.80) in the eighth.