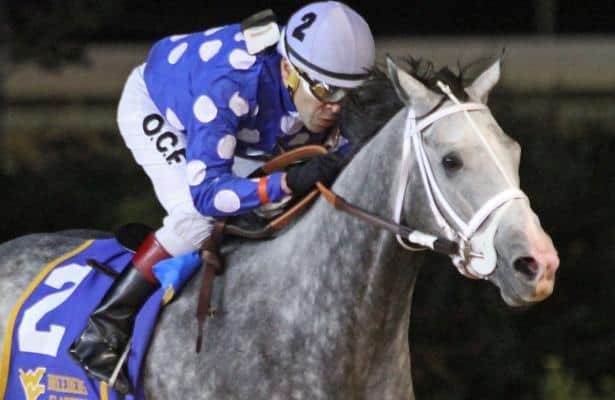 Moments after the back-door locked, Runnin’toluvya reared violently in his stall, throwing rider Christian Hiraldo to the ground.

The official chart notes Runnin’toluvya, who bettors had endorsed as the heavy 1-2 favorite, also managed to break through the front of the gate during the incident.

The son of Fiber Nonde, who is owned and trained by Timothy Grams, was subsequently examined by the on-site veterinarian.

Everything appeared to check out. Back in the gate he went.

When the stall doors opened, Runnin’toluvya flashed good speed while stalking the pace in second through the first six furlongs. Entering the stretch, however, Runnin’toluvya began to be eased.

Hiraldo eventually got the 5-year-old gelding pulled up past the finish line, which is when observers noticed blood running down the entirety of Runnin’toluvya’s left hind leg. He was vanned off the track.

First, the good news: Runnin’toluvya was reportedly doing fine Sunday morning and only “a little scraped up” from the incident, according to Grams.

Just spoke with Tim Grams. He says Runnin’toluvya is doing fine today, and is just a little scraped up.

He’s one of my favorite horses, and I’ve been having a tough time trying to process the events of last night. But right now I’m just happy that he’s gonna be alright.

But, in this era of increased scrutiny on racing safety, the question in many people’s minds: How was this horse able to compete in the first place?
Erich Zimny, vice president of racing operations for Charles Town Races, noted on-site veterinarians at Charles Town are not employed by the track. Instead, they are appointed by the West Virginia Racing Commission.
“As far as the decision goes, as the track operator, I have no say in that decision whatsoever,” Zimny said. “The vet who is presiding at the scene is not a track vet. There is no track vet that is under the control of the track. They are all under the auspices of the racing commission. We have no input into whether the horse should scratch at the gate or not. That’s going to be the attending vet’s call.
“I can tell you that not only was the attending vet there, but Runnin’toluvya was ponied by his trainer before the race and he was there (at the starting gate) as well. I know they were both there with the horse. But at the end of the day, the decision has to be made by the vet.”
Horse Racing Nation was unsuccessful in reaching a representative of the West Virginia Racing Commission for comment Sunday.

As for Zimny, he plans to follow up on this matter with state racing officials later this week when racing resumes at Charles Town.

“I’m certainly going to discuss with the stewards here when I’m back in this week about what they saw,” Zimny said. “But again, I have no dominion or control over (commission) employees, nor do they really have over ours.

"But again, the professionals who were there to make that decision were the ones on the scene. And they made that decision. I’m not here to Monday morning quarterback anything. They are the pros who are entrusted to make those calls.”

In three seasons of racing, Runnin’toluvya has tallied earnings of $950,756 while winning 13 of 20 starts. His upset in the $1 million Charles Town Classic in April at odds of 10-1 is his only graded stakes win.
West Virginia Breeders Classic